I love “Julia Dream”, a song by Pink Floyd. I don’t, however, love Julia , a novel by Peter Straub. I mean – I like the novel. A little. Somewhat like. I guess.   Okay, okay – I’ll stop dripping out these qualifying phrases and get to the heart of the matter.

Here’s the synopsis – A woman (Julia) fleeing a troubled past finds herself living in a haunted house. She struggles to make sense of her new surroundings. Who is that young mysterious blonde girl that she keeps encountering in the nearby neighborhood? And why does Julia sometimes hear the sounds of someone rummaging around her house while she sleeps at night.

As per the synopsis on Amazon:

Julia’s first purchase upon leaving her husband is a large, old-fashioned house in Kensington, where she plans to live by herself well away from her soon-to-be ex and the home where their young daughter died.

Does the mysterious girl have something to do with her daughter’s death? Is Julia being haunted by ghosts?

Many of the haunted house novels and movies that I have absorbed follow a formula similar to this. Authors Darcy Coates and Blair Shaw, for instance, have published several stories about women who suddenly find themselves living alone in a haunted house. Often they are burdened with the baggage of tragedies past, and this only makes their haunting encounters all the more unbearable. Or maybe, these encounters are one and the same with what has haunted them in the past; maybe these are old phantoms disguised as something new. Jeffery Konvitz abides by this formula in his novel The Sentinel The story within the film Sensoria follows this pattern as well.  Yet Julia, published in 1975, predates all of these. Is it then a first of its kind? Probably not.  Shirley Jackson’s 1959 novel The Haunting of Hill House has a somewhat similar synopsis. The protagonist is not alone in the haunted house, but she does arrive with plenty of emotional baggage, so much so that she becomes an unreliable narrator.  Her sense of reality is in question, and therefore so are her perceptions. This is the same situation readers face with confronting Straub’s central protagonist. Are Julia’s experiences real or are they hallucinations; byproducts of her troubled mind? Thus, the influences of Shirley Jackson are easily recognizable.

I have no objection to an adherence of a formula, so long as it’s not a strict adherence. 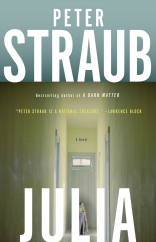 There needs to be ingredients of originality in the brew somewhere. Julia is not without originality. My criticism with the story has to do with its telling. At times, the events of the tale are ambiguous and vague. I found myself confused; is this event that Straub is describing real, or is it a dream. Or, is it just a section that’s poetically licensed to do whatever the hell it wants to do? I know what you’re thinking  “Well this kind of writing is to be expected in a mysterious novel that features an unreliable narrator.” To a degree I agree (hey that rhymed!). But as my great grandmother would say, “enough is enough of anything.”  When a situation is written so vaguely that comprehension is lost and the flow of the story suffers, then Houston, we have a problem.  Sometimes I wasn’t sure as to which character was  thinking/dreaming up a specific surreal situation.

It is well known that the supernatural is a staple of Peter Straub’s works. He is considered one of the masters of his genre and I in no way wish to challenge this mastery. However I learned from Wikipedia  that Julia is Peter Straub’s third novel, but it’s also his first attempt  at writing about ghosts and the supernatural. Bryant Burnette who writes for the blog Truth Inside the Lie has read Straub’s first two novels, and wasn’t all that impressed with them. He saw a marked improvement in Julia, at least in terms of character development. At the same time, he too finds his vagueness daunting.  He says:

.. failing that understanding, our lack of understanding is a part of the narrative.  Straub isn’t 100% successful at this 100% of the time — he occasionally falls back on the old trope of having a character be vague when it makes much more sense for them to be explicit — but he gets it right way more than he gets it wrong.

I would say he gets a right more than half the time.

Having not read his first two novels, I can only compare Julia with the one other novel of Straub’s that I have read. A fitting comparison it is, because they are similar in certain ways. But the later novel, Novel # 5, (reminds me of this song, replace “novel” with “mambo”) is superior. I am referring to Ghost Story.

Both Julia and Ghost Story convey the idea of a vengeful, female spirit. Julia is a relatively short novel whereas Ghost Story is a gigantic, ambitious work. To me, Julia is the “practice novel;” an exercise Straub must perform while on the way toward the masterpiece that is Ghost Story. Straub learns from his early works. The fruits of his creative and mechanical maturity bear out symbolically, from the ghost of a young girl (in Julia) to the ghost of a fully grown woman (In Ghost Story). This time, Straub’s vagueness add to the overall eeriness of the story.

I am no expert of the works of Peter Straub. He is a favorite of many, including Stephen King. In both of the works that I have read I see talent. But Ghost Story is where his talent is fully realized.  In Julia, this talent – it’s there, but  it is still struggling to come to fruition. Therefore, alas, I can only give it a half-hearted recommendation.  But at least I put my whole heart into explaining why I  “sort of liked” and did not “love” this book, as I promised I would do way back at the end of the first paragraph. Remember? But of course you do! You rock, but not was well as Pink Floyd.