There won’t be any posts for a few weeks as I have some personal business to attend to. (Oh no, I have ended a sentence with a preposition!)  But I will be back!  Keep the house haunted for me!!! 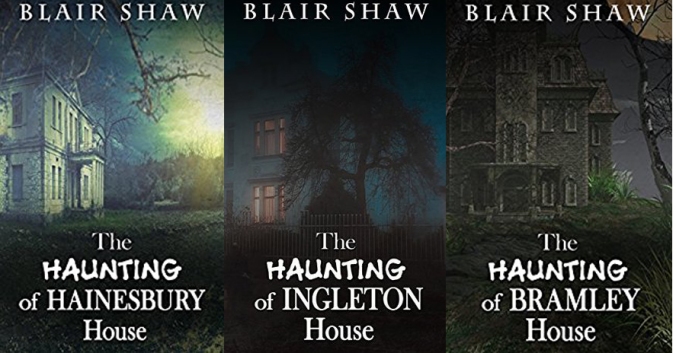 There are houses. There are hauntings.  There are hauntings that take place in houses. A fitting book title for this kind of thing might be The Haunting of ( *insert name of house here*). There are several (tens? Hundreds? ) novels that make use of this title template. That’s understandable. After all, it is practical. It communicates to prospective readers what they need to know.  In a nutshell it states – “if you’re looking for a haunted house novel, you have come to the right place”.

I am including all three in this one review.  Why not give each book its own review?  Two reasons #1) They are very short reads. #2) They all follow the same formula.

Here is the formula.  The book(s) begin(s) in England in the distant past inside a house that is named after its owners. Cruelty and murder have claimed the lives of some of the inhabitants. Fastfoward  a hundred years or so. A woman is leaving her home in the United States,  fleeing a sad past and facing a new adventure on the otherside of the Atlanic.  Sometimes she has offspring to care for, other times no.  She moves into a large manor in England, the same manor where the deadly tragedy took place. Of course, the place is haunted by the spirit/s of those that perished in the tragedy.  Their disturbances are rather bothersome and in some cases deadly. Luckily, there is a way to rid the house of these spirits. In each case, (in each book), the American Woman figures out what needs to be done. She fixes it so that the spirits can pass on to their eternal home. Then she (and sometimes her offspring) lives happily ever after. The end.

While working out the framework for this review, I returned to Shaw’s Amazon Page and learned that she has since put out two more “The Haunting Of….” Books:  They are The Haunting of Addison House  (Date of publication March 31) and The Haunting of Morgan House (Date of publication April 16). She’s cranking these out faster than a ghost in a speed machine. However, I am not rushing to read these latest editions.  After reading the three, I’m in the mood for something; shall we say “meatier”?

These aren’t bad books.  I prefer something a little less formulaic, but nevertheless the stories are engaging.  Shaw is a good writer; she expresses herself clearly and concisely.  But I would equate these novellas to appetizers. These are stories to read in between books. They are like the “shorts” that used to premiere before the main movie back in the golden age of film. I make these comparisons not only because they are short reads. I use these analogies to equate the level of depth as well. These are simple reads. There aren’t any twists; nothing profound is going on here.  But not everything is designed to be a masterpiece.

I will say this – what I like best about her novellas is the beginnings, the prologues (although they aren’t labeled as such) that tell the historical backstory. Shaw has a talent for making me feel a home in a different time period.  They describe the feeling of the times well without resorting to archaic language. Perhaps I will make the time to read the rest her novellas – someday.  They did seem to get better with succession.  I just wish Shaw would write a longer, meatier book.  She has it her, I just know it!

I just wanted to take the time to introduce a special feature. It’s called (get this!): Special Feature.  Funny how that works out! It’s a static post that will remain for an undetermined amount of time until a new feature comes along.

Truth be told, I have had a Special Feature for some time, I just never called it as such.   Last October it was The Ghost Hunt game.  During the Christmas holidays (and long after), it was my Christmas Eve Ghost Story. Well I finally have a new Special Feature for ya!  It’s sort of an essay; part fiction, part analysis, part…something. Oh hell, it’s my thoughts on ghosts! Therefore it’s called “Thinking About Ghosts.” (Again, funny how that works out!)

The link to the Special Feature is on the menu at the top of the Home Page.  And it’s also right here: SPECIAL FEATURE!

A review I wrote for HorrorNovelReviews.com

Of all the supernatural entities within the horror genre, ghosts are my favorite.  There’s something enigmatic about the specter that I find appealing.  Free from the constraints of solidity, it is able to take on many shapes and appearances. It can be visible or invisible, symbolic or literal; as sightful as a passing shadow or as elusive as disembodied emotions.  A well-written ghost story should foster its specters within this complexity so that the mystery surrounding their nature is important to the story’s scare factor.  The ghost stories of Joseph Sheridan LeFanu succeed on these measures.  He is often considered the best when it comes to ghost stories of the Victorian period.

Carmilla by LeFanu is a story about a vampire, not a ghost.  However, I loved it, partially because LeFanu uses much of the same criteria for this vampire novella as he does for…