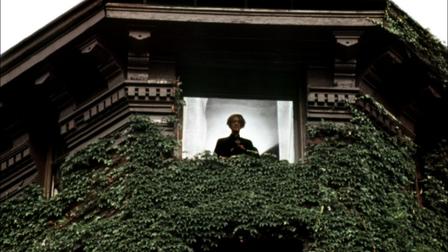 On previous occasions I have reviewed Haunted House stories where the house serves as a portal to some other dimension. First on my list are some of the houses in H.P. Lovecraft’s stories. These include The Strange High House in the Mist, – a tale of house that sits on a mountain top with a door that opens into The Heavens for any celestial deity who happens to be in the neighborhood, and Dreams in the Witch House – an account of a house possessed with “unearthly geometry” that allows a brilliant mathematician to visit dark worlds.  The second “house as a portal story” that I reviewed is House on the Borderland by William Hope Hodgson. The protagonist of his stories lives in a house that transports him across space and time.

Now I have a third one for ya! The story comes from a book by Jerry Konvitz, published in 1974. I have not read it. Instead I saw the corresponding film in which Konvitz wrote the screenplay. Both the book and film are called The Sentinel (not to be confused with the political thrill which came out in 2007). Let’s examine the film’s title as it relates to the theme I was discussing in the first paragraph.

A sentinel is a guard. As mentioned, the film fits into the theme of houses that serve as portals to other dimensions. One might then conclude that perhaps the “sentinel” of this movie guards this mystic door. If this “one” does in fact arrive at this conclusion, than this “one” would be correct. Question: What kind of portal does this sentinel guard? Answer: The doorway of Hell! It is a door to hell and, more apropos to the film, from Hell.   See, not too many people here on earth are knocking each other over to go through the door. But, I bet there are plenty of beings that just can’t stand the heat down there and want out. Hence, a sentinel is needed to keep these hellish folks at bay. And where might this doorway be? In an apartment complex in New York City! I mean, where else could such a portal be located? So understand – any crime, debauchery and ill-will that arises in this city ( I think there just might be some of this is good ol’ NY city) just might be due to the sentinel being asleep on the job! I’m just kidding! Any kind of nasty shenanigans that happen on the streets of New York is not on account of the things that slip through this door. These things are confined to the apartment complex and its many units.

Along comes unsuspecting Alison Parker. She is a fashion model with a troubled past. She had been placed under psychiatric care for suicide attempts. Determined to make it on her own, she refuses her live-in boyfriend’s marriage proposals. She moves out of his place and into an apartment complex where the rent is startling cheap. See what I did there with the word “startling”? I was giving you a hint as to what kind of apartment complex this is. Maybe it’s the one I was referring to earlier; the one that has a doorway to hell? Ya think? Well you “think” correctly!

Right off the bat, Alison is freaked out by the blind priest that does nothing but stare out a window from a top floor unit. What’s the deal with that guy? Miss Logan, the real-estate agent, tells her that he is harmless. But she does not divulge any other information about him. Maybe Alison’s new neighbors know something about him? She asks Charles Chazen, an older gray haired guy that walks around with a parakeet on his shoulders. He says to forget about that priest. He’s just a strange but harmless guy. Speaking of strange, Mr.

Chazen is little bit offbeat himself. The two “lesbian sisters” that live below Alison are not exactly normal either. Nor is the gathering that is being held for all the tenants. Mr. Chazen leads Alison to one of the apartments where – surprise, surprise! A party is going on. The lesbian lovers (sisters) are there, as well as several other tenants. There is dancing and music, all in honor of the birthday celebrant – Charles Chazen’s cat!

After a while, Alison is disturbed by all these neighbors. Their parties that take place in the apartment above her are too loud. Her bedroom chandelier is always shaking at three in the morning. She complains to Miss Logan about this, only to have her tell her that she has no neighbors. Father Halliran (the blind priest) is the only other tenant in the complex. So who were all those people at the party? Who is Charles Chazen? Where did those sister lovers come from? Are they all byproducts of her disturbed mind? Nah, they are just people who died and went to hell. Didn’t Miss Logan tell her about that doorway to the underworld? No, I guess she didn’t. Maybe she herself doesn’t know about that feature of the property, but I doubt it. She does, however, take the time to show Alison all the units where she claimed there were people living and partying. Inside all that existed was was cob-webbed emptiness; dusty rooms with paint peeling off the ceiling – rooms void of furniture.

I remember seeing some of this movie on TV when I was a wee young lad. Of course, all the R-rated stuff was removed. But it fascinated me until I was sent to bed long before the movie was over. Finally, thirty-five years later, I got to see the ending. It’s a very good ending, by the way. But how about the rest of the film? Did I like it? Mostly. Sort of, you know. A little bit.

Ava Gardner  plays Miss Logan. While this character is not a scene grabber, Gardner’s subtlety makes a believable character out of this real-estate lady. John Carradine has never looked creepier playing the blind priest with white, pupil-deprived eyes. And then 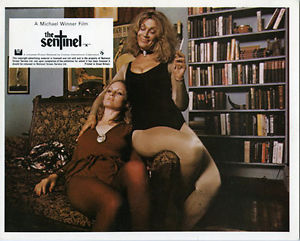 we have Burgess Meredith who who with charm and grace gives a stunning performance as the eccentric and festive neighbor Charles Chazen. Then there’s Sylvia Miles. She may not be as well known but she shines and the eccentric lesbian neighbor Gerde who partners with Jennifer, the mute exhibitionist who masturbates in front of Alison. Jennifer is played by Beverly D’Angelo who might be best knows as “Ellen Griswold” in the National Lampoon’s Vacation movies. Eli Wallach is good as the cynical detective.

There are also now-famous actors that have brief roles, including Christopher Walken, Tom Berringer, Jeff Goldblum. Supposedly Richard Dreyfus has a walk on role but I totally missed him.

It’s a thrill watching this ensemble. The cast that portrays those wacky neighbors shine in scenes where they are altogether, like the birthday party. What is not a thrill is watching the two main characters. Ho Hum!

Christina Raines plays Alison Parker. Her acting is bland. Even worse is Christopher Sarandon who plays Michael Lerman, Alison’s lawyer boyfriend. He’s stiffer than a board!

Unfortunately, this former husband of Susan Sarandon has a lot of screen time. Too much! Large chunks of the movie revolve around him as he confers with police and priests. See, he is using his skills as a lawyer to research the haunted apartment complex and discover more about the strange blind priest. Oh God, I wish he didn’t! I found myself shouting at the TV, “Just stay out of it Mr. Mustachio Douchebag! (he dons a cheesy mustache. I don’t know if he has “that other thing”) I want to see more of the neighbors and the haunted complex and less of you and your research!” 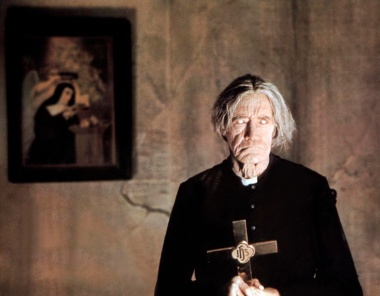 Finally, at the film’s end, the neighbors make a screen welcoming return. They bring with them several deformed people. Hell is emptying! And there’s the blind priest – The Sentinel! A terrific scene this is!

By the way, I am recommending this film despite the snore-fest that is Raines and Sarandon. The supporting cast makes the film, as does the atmosphere within the apartments. It’s a decent idea too, a hell portal inside a New York apartment building.

In the land of the novels, there is a sequel book (The Guardian) and another on its way.

But there is only one movie. Maybe I’ll read the novels. They are probably much better 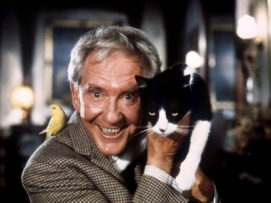 than the film. But I say – give this movie a chance. If nothing else, get a hold of the DVD and watch only the scenes with Burgess Meredith. I love that man!