Hello ghosts! Yes that’s you – the readers of my haunted house pieces. That’s how I refer to the people of my haunted house Facebook page so I might as well extend the same courtesy to the readers of my blog.  I thought it might be nice to post a news piece every once in a while with updates on who’s haunting what house, which ghosts are floating around these days – things like that. In other words, it will be a piece on what’s coming around the bend in my world of haunted houses within film and literature.

That said, let’s get to it!

First of all, I have written a haunted house book that will soon be available for purchase. It’s called The House Sitter. Here’s a picture of the cover:

It’s a story about Brad Johnson, a writer who is tortured with a dark and demented mind. He envisions things that threaten his sanity. In order to dispel these visions, he haunts “things”. He writes horror stories centered on household objects. Although the terrible visions are then expunged from his mind, they end up clinging to the targeted objects and haunting them for real.

Brad Johnson agrees to house sit for a friend. While under his care, the house becomes haunted.

The story will be told from three different perspectives. First there’s the third person narrative which moves the overall action of the story. Second, there are the journals Brad keeps. There are written in the first person.Third, there are the stories that Brad writes. One is about a boy who falls down his grandparents’ laundry chute, only to discover a maze filled with monsters and demons. The second concerns a disturbed young man that rents an attic bedroom. He invites a woman to his room, only to murder her. He locks the body out on the balcony. But his date is not content with being dead. Her animated corpse tries to break in and return to the attic. Finally, there is a wicked old man with a house full of mysterious antiques. One such item is a music box that summons ghosts.

This book should be available in the next couple of weeks. I am currently giving updates on its status at my Facebook author page:

Still with me, ghosts? How’s it ‘Shining’? That cheesy pun is my way of calling attention to a project I am currently working on. I will be reviewing Stephen King’s groundbreaking novel The Shining along with Stanley Kubrick’s film version of the same story. The television mini-series will be included in the review as well. I have read Stephen King’s

novel a couple of years ago but I am skimming through it once again. I own the Kubrick film and have seen it several times. But hey, what’s one more viewing? Once more in preparation for this review!   So far I have watched 2/3 of the series. I will certainly finish it up and get to work writing! The piece will include quotes from Stephen King and other interesting tidbits that are directly or indirectly related to the story.

I am currently reading two haunted house novels: Clive Barker’s Coldheart Canyon and Darcy Coates’s The Haunting of Gillespie House. I am really enjoying both books. Expect reviews in the near future!

Soon it will be my birthday! It’s about a month away. I am going to ask my loving wife to buy a special present – a leather bound illustrated haunted house novella by William Meikle – The House on the Moor

Check it out here! 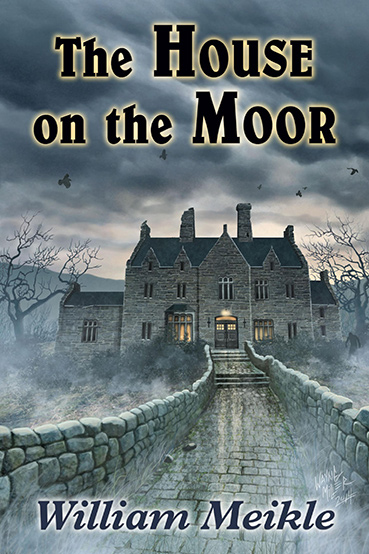 Another author has joined my Facebook page. Welcome C.M Saunders! He has an impressive library of books for sale. His next book, due out March 1st, is a haunted house novel. Yay for that! It’s called Sker House and you can check it out here:

And here again is a link to my Facebook page:

Hope the year so far has been treating everyone well! Bye for now!