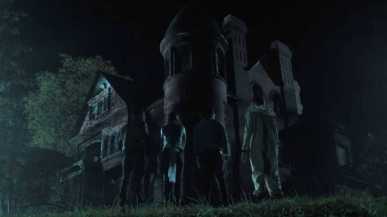 Happy Mid-August to you all!

Sorry I haven’t been posting much lately.  Let’s see now, my last post, my review and analysis of Anne Rivers Siddons’ The House Next Door was published…wow…on July 2nd!  Has it really been that long? I guess it has. I blame my lack of blogging on the summer.  In addition to being an autumn kind of guy, with my love of autumnal colors, Halloween and haunted houses, I’m also a summer guy as well and I try to get in as many outdoor activities as I can in a short period of time.

Some summer rituals do involve The Great Indoors, though.  Such a ritual includes seeing a movie on a weekday during the daylight hours. Blame this on those summers of my high school years when going to matinees was a regular, cherished activity. Oh that precious nostalgia! To relive those days of my youth is to reengage in such rituals, and reengage I did. I went to see a seasonally appropriate film if there ever was one, for the days are getting colder, the nights longer, and fall is just around the corner. But for me at 2:35pm on August 14, 2019, autumn was already here, on the big screen, with its wonderful oranges and auburns, with its comfy wool sweaters and letterman jackets, with its Halloween celebrations, and most importantly, with its nightmarish monsters that prey on high school kids. This sneak preview of autumn even featured the small-town haunted house that stands behind the woods!  And this house is why this movie gets a review on my page. The movie is Scary Stories to Tell in the Dark.

Before getting into the guts of the story, let’s go back to that season shit again.  Aw come on, it’s appropriate and it helps establish the feel of the film.  The autumn theme whacks a bit of certainty into today’s Chicago season. Mid-August, soooo uncertain, the weather doesn’t know what to do – be hot? Be cold? At least with Scary Stories to Tell in the Dark, I’m not having the kind of anxiety that is similar to one waiting to depart on a trip – I’m already there! I’m in a small town on October 31st, and seasonal testaments abound! There is the field of fully-grown corn with its stalks turning a golden brown. There are fallen leaves and wind is tossing them around, there are Halloween decorations in the windows. Maybe it was my imagination, but it seemed the insides of the houses were geared up in autumn colors as well. The wallpapers (this is a period piece, 1968 I believe, as a Nixon election victory was shown later in the film) conform to the hues of this magnificent season. Great job to the set designers.  The film Halloween (1978) is often cited as the epitomical autumn horror film, for it too took place in a small town with houses decorated for Halloween, with its streets filled with blowing leaves. But Christ, this is supposed to be a fictional town in Illinois (Haddonfield), and there are fucking palm trees everywhere. The leaves are so green, too green. Alas, Halloween was filmed in California, and this is the reason for all this out of place scenery.  In Scary Stories to Tell in the Dark, everything is in the right place. School is in session; high school activities are taking place. So if for no other reason, I recommend seeing this film for its knack of instilling the spirit of autumn. Special effects aside, the landscape is beautiful.  Oh, and the film’s story isn’t too bad either.

The story? Oh yeah – that. Four teens decide to explore the haunted house at the edge of the woods on Halloween night. It once belonged to the very prominent Bellows family back in the 19th century – a family that built and ran a mill which in effect created the town with the jobs it brought to the area.  The family is long gone (later we will learn – most just disappeared from the face of the earth).  The daughter of the family, Sarah, is kept in lock and chain and hidden from the outside world, so the rumors go. The legends also have it that Sarah would tell scary stories to children who listened to her through the walls.  Upon hearing the stories, the children would vanish.  Ah those small-town folktales, pretty silly huh? Well poor Stella, Ramon, Auggie and Chuck get a large helping of this “silliness” and it ain’t too pretty.

While exploring, aspiring horror writer Stella finds a book of stories written by Sarah herself, penned in blood so it appears. She brings it home. Hey Stella!   That wasn’t such a good idea. Oh Stella!

By stealing the book, Stella has awakened the vengeful spirit of Sarah Bellows. And she is cranky, having been “dead asleep” for however many years. In both death and life, Sarah utilizes that unique skill she has – what she writes comes true. She writes about scary stories and legends. And, she will write about the teens that roamed about in her haunted house. Words appear on the pages in present time, and she casts the teens as the victims of such monstrous creatures. Could it be that Sarah had caused her family to disappear by writing them into these terrible tales of hers? Could be!

A team of creative individuals are at the helm of this film.  It is directed by André Øvredal, director of The Autopsy of Jane Doe. If you haven’t seen this film, treat yourself to it as soon as possible.  As for the film currently under review, it is based on a screenplay by none other then Guillermo del Toro (which is loosely based on the books by Alvin Schwartz, more on this later). G del T also helped to produced this film, so if you’re looking for his signature creepy monsters, you’re gonna get them! (although many are replicas of illustrations from the books. Replicated awesomely I might add!) 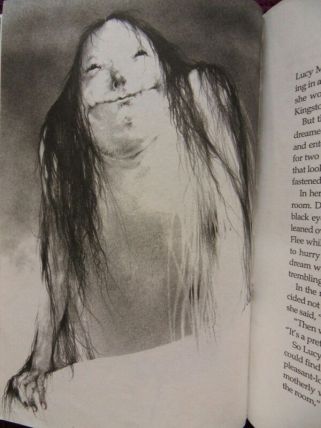 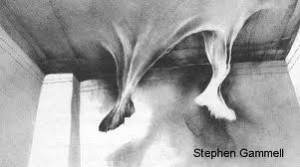 I consider myself blessed for not having read the books, for I am sure that I would have found the film unfavorable by comparison. But you see, the film is looooosely based on these stories. The books, from what I gather, have no ghostly author that pens stories that come true. That underlying arc from the film was a device used to reenact these stories on the big screen. See, some of the stories of the first book will be the stories that Sarah will bring to life in the film, such as The Big Toe, where a corpse comes looking for her missing toe, which is inside a pot of stew. Ewww! (“Stew and Ewwww”, they rhyme.) But from what I gather, even the details of these stories within are not exactly the same as they are in Schwartz’s books.

I have to wind down this review with my favorite subject – haunted houses. What is found inside the haunted house (Sarah’s book) serves as the catalyst for the scares in the movie, most of which occur outside the house – in a cornfield (that scarecrow is creepy, and yes, it will come to life and do some killing), in a bedroom (hiding under the bed won’t save you from the corpse woman that is looking for her toe!), in a high school bathroom (where every high school student has faced the horrors of self-insecurity by looking in the mirror. Hey Ruth, there’s something popping out of your pimple!), in the halls of a restricted area in a psychiatric facility (That big bloated “huggy monster” with that curving smile, man she looked weird), inside the jailhouse (through the fireplace comes the Jangly Man, piece by piece, down the chimney and into the fireplace).  But it is to the house our heroine and hero must return by the movie’s end in order to restore order. And the house does what a good haunted house always does: it recreates the tragic events that occurred over a hundred years ago and unveils a treachery kept secret up until now.

Is this a great horror movie? I don’t know about “great”.  Is it good? Most definitely. It’s entertaining, scary and looks damn good, and I’m not just writing about the stylized monsters. Guillermo del Toro is skilled at making things look good, and though he might not have been the one to make it all happen, his influence was definitely there.  The whole atmosphere shines of a storybook autumn and its small-town nostalgia.  It pleases the senses of sight. There are some jump scares but thankfully they are used sparingly.  It’s more effectively frightening to watch the monsters lumber along, taking their time, giving the audience a fair chance to embed them into their nightmares.  Yes, some of the monster travel at CGI speed, but I like the ones that didn’t better. Who needs speed when a confident monster knows that s/he will get you in the end!