Should this be the review where I delve into the found footage phenomena and provide insightful analysis on its effectiveness at establishing horror? Uh..nah!  Maybe instead, I can go into what works and what doesn’t work when using the found footage style of filmmaking to make a haunted house film?  Nah to that as well.  Truth be told, I am no expert on these things. Moreover, a lot that depends on personal preference.  Quite often it boils down to a) You like found-footage films. b) you do not like found footage films.

For me it’s hit or miss. V/H/S, the film under review, is a found footage film.  For the most part, it is a miss.

Since some of you might be unfamiliar with the found footage subgenre, an explanation is in order. I was about to do some explaining but then I thought, “to hell with that”, why not find a description and then quote it? I think, therefore I do.  So here is a definition/description from Wikipedia:

Found footage is a subgenre in films in which all or a substantial part of a fictional film is presented as if it were discovered film or video recordings. The events on screen are typically seen through the camera of one or more of the characters involved, often accompanied by their real-time off-camera commentary. For added realism, the cinematography may be done by the actors themselves as they perform, and shaky camera work and naturalistic acting are routinely employed. The footage may be presented as if it were “raw” and complete, or as if it had been edited into a narrative by those who “found” it.

The most common use of the technique is in horror films (e.g., Cannibal Holocaust, The Blair Witch Project, Paranormal Activity, [REC], Cloverfield), where the footage is purported to be the only surviving record of the events, with the participants now missing or dead.

Fun House was the first horror movie I saw in the theater. I saw it was with my dad. In the film the characters are murdered, one by one.  Only one person, a girl, is left at the film’s end. After the movie, my  dad had told me that he knew she would live because someone has to survive to tell the story. He was correct. But with found-footage films, a sole survivor is no longer necessary. The camera is left behind to detail the events. If part of the story is “missing”, that supposedly only adds to the overall mystery.

Found-footage films are supposed to look “real”. That is, they are made with an intentional amateurish quality so that they appear to be made in real time and not according to a script.  Therefore when something horrific happens, the intended illusion is that it is happening “for real”.  I get all that. But to me, V/H/S is largely unwatchable. Too much shaking, too many haphazard shots, too much , too much too much. And besides, what’s with the letter –forward slash – letter –forward slash title. Can’t a simple “VHS” do? I guess not.

I am writing this review on account of the two haunted house films that appear in this anthology.   There are six films in all, with one being the film that ties the rest together.

The “tie-together” film is Tape 56/frame narrative. A group of petty thugs break into a house in an attempt to steal a VHS tape for which someone is willing to pay a lot of money. The man who lives there is a tape hoarder. But the intruders find him dead in his chair, in front of a TV, in a room with hundreds of tapes. The intruders started playing some tapes. The tapes they play make up the rest of the stories in this film. So what we have here is five found footage films inside one found footage film.  How….arty?  Mmmm…mmeh.

Anyway, let’s get to the relevant films. “The Sick Thing That Happened to Emily When She Was Younger,” directed by Joe Swanburg, is about a woman who lives in a haunted apartment. The whole story plays out on video chat. Emily occupies the big square of the chat and we see chat partner James in the smaller square.  James (along with us the viewers) bears witness to the haunting when he sees the video images of young ghostly girls creeping around behind Emily.  This is an okay film story wise. The typical annoyances that are built into  found footage films are kept to a minimal. Still, viewers have to put up with straying camera angles now and then. We have to watch the main chat screen succumb to the pixilation errors. I hate when this happens when I am on a video chat so I certainly don’t want to watch it happen in a film I am paying to watch.

10/31/98 is the better of the two haunted house films. Directed by a group collectively known as Radio Silence (Matt Bettinelli-Olpin, Tyler Gillett, Justin Martinez & Chad Villella), the film is about a trio of young men who arrive at a huge, multi room/multi floor house for a Halloween party. All the rooms are lit up, but where are the guests? They decide to explore the confines. They make it to the topmost part of the house and they stumble on something very disturbing. After this they make a run for it. This is when the house itself freaks out.  Through the shaky, mobile camera, we see arms reaching out from the walls. We see dishes rise off the table. In every hall, every room, as they run, run  run, we see something creepy and unnatural. It’s almost like a Halloween haunted house attraction, only this place has some real magic going on.  I love it all– except for the shaky camera. If only for a camera that was held still and directed properly, then maybe I can better see those lovely haunting antics. But no, can’t have that. After all, this is a found-footage film.

My favorite of all the stories is not a haunted house film. It is Amateur Night, directed by 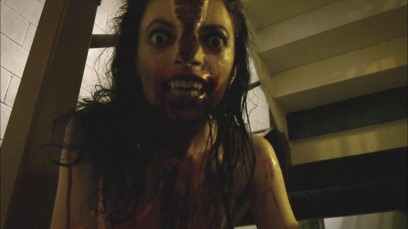 Bruckner. Three guys go bar hopping and bring home two women. One of them happens to be a succubus. Once they learn of her demonic tendencies, the rest of the night doesn’t go so well.  Loved the film but once again, the shaky camera ruins the whole thing.

Perhaps some people feel that the shaky camera work enhances the horrific realism. I am not one of those people. However, there are some found footage films that I really like. One film really pays off with this technique. While some don’t consider it a haunted house film, I do. If memory serves me correctly, the shakiness is kept to a minimum, if it’s even there at all. I’ve been meaning to review this film for some time. I will do so. Soon. And then and only then will its title be revealed.