Demonologists Ed and Lorraine Warren heed their call and once again come to the aid of a family that is plagued by evil spirits. This time, their call takes them across the ocean. They pack their bags and leave their New England home, bound for “Old” England, where they are to investigate a phenomenon that has been described as “London’s Amityville.” The Hodgson household consists of a single mother, her four children, and one or two unwanted presences. Will the Warrens be able to rid their home of these unwanted guests? And, more specifically, will they be able to help Janet Hodgson – the young girl who frequently becomes possessed by this evil? Go see The Conjuring 2 and these questions will be answered. Until then, read the rest of this article for informative tidbits and opinions.

Oh good, you listened to me and continued reading. Let’s begin with some background information. For those new to The Conjuring series, the reoccurring characters of Ed and Lorraine Warren are based on a real married couple that investigated paranormal phenomenon back in the 1970’s and 80’s. According to wikipedia, the Warrens claimed to have investigated over 10,000 cases of “actual” or “potential” of supernatural activity. Does this mean that we should settle in for 10,000 movies? Probably not – that’s overkill. But the Warren case files have spawned several movies, including both Conjuring movies. The first film is based on the 1971 Perron Family case – ghosts and or/demons haunt the Rhode Island home of this poor family (click here to read my review of The Conjuring). This second film is based on the Enfield Poltergeist case, which documents moving furniture, overturned chairs and levitating children. The film shows all this and so much more. Other films loosely related to the Warrens are Annabelle,  The Haunting in Connecticut, and The Amityville Horror. While there are no references to the Warrens in The Haunting in Connecticut and Amityville Horror, The Conjuring 2 opens with Ed and Lorraine investigating the Amityville House after The Lutz’s have fled. In order to determine if there is an evil presence associated with the house, Lorraine uses her skills as a medium to experience the horrific murders that claimed the lives of The Defeos –the family that lived in the house before The Lutz’s. From the killer’s perspective, she comes to understand what happened that fateful evening while uncovering a clue she does not yet understand, for it is a clue that is linked to things that would occur later in the Hodgson house. This opening sequence is brutal, chilling and captivating all at the same time.

So, what did I think of the rest of the movie? Before I get into that, let me be honest about 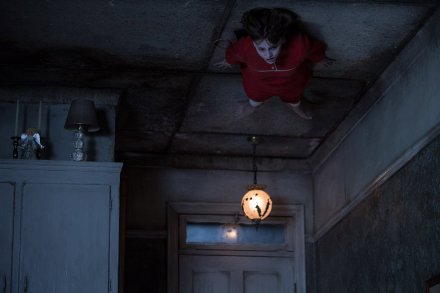 certain biases on my part. First, I prefer the ghosts and demons of films and literature to be somewhat elusive; their origins speculative, their nature not limited to the narrow parameters of “good” and “evil”. The spirits of The Conjuring films are evil demons as defined by the Bible. Adhering to tradition of well-known demon lore, we assume they will take possession of someone, mostly likely a young woman. We suppose that the possessed victim will at some point rant in a guttural, inhuman voice. We expect the demons to get a little testy when confronted with a crucifix – the symbol of “goodness.” All of these assumptions, suppositions, and expectations come true. Second, I favor unhurried and carefully crafted atmospheres of disturbances to the flashy and loud jump scares. Creepy over shocking, I say! The Conjuring 2 has a lot of jump scares for sure, more than its predecessor. For these reasons, it is doubtful that any films of The Conjuring series will make it to the top of my preferences list.

All this being said, The Conjuring 2 is a decent film with plenty of scares for everyone. While the film relies heavily on “jump scares”, they are done effectively and creatively. A person or object is on one side of the room and then suddenly, there s/he/it is right before the camera and this “jump” is unexpected. The ghosts and demons in this film manifest in scary forms. If you are the type of person that wants to see the phantoms that are doing the haunting, you will not be disappointed. And overall, the acting is good, the characters are sympathetic, and there are some touching moments outside of the realms of the scare factor.

I’ll let you be the judge as to what’s “true” about this film. In my opinion, it is fiction based on fabrications of truth. Ah but who am I? Maybe the events portrayed in this film are very real for some of you. If so, great – all the more reason to be scared. And isn’t that why we see horror movies in the first place – to be scared?

Thank you for reading this article.  If you enjoy my writing, please consider buying my latest book The House Sitter.  A writer/house sitter haunts a house with his stories. They haunt him back in return. Click on picture to see the book on Amazon

One thought on “Review of The Conjuring 2”