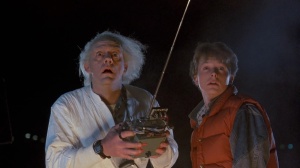 Everything is a buzz with Back to the Future  these days. Go to backtothefuture.com and you will see the words “The Future is now!”  Back in 1985, time travelers Marty McFly and Doctor Emmett Brown traveled to the seemingly “far away future” of 2015.  This was after several misadventures in the year 1955 where Marty almost fucked the future up by nearly erasing himself and his siblings out of existence. But they straightened all that out, and at the end of the movie….WHEEEE! They took their time traveling DeLorean to the real future – 2015.  They had gone thirty years back and then thirty years forward. What a deal!

Back to the Future was the best movie of the summer of 85 in my opinion. I admit that, before seeing it, I was skeptical. Yeah yeah, “that guy” is good at playing Alex P Keaton on Family Ties (I’m not even sure I knew the name Michael J Fox yet!), but does he deserve his own movie?  It turns out, he did. He was great. I believe I sat through several viewings of BTTF at the Norridge Theater, a suburb of the northwest side of Chicago. So many memories that summer!  And now that far away future that was depicted in the movie is here. How time flies!  “Literally” flies, according to the movie. The DeLorean lifted into the air as Doc Brown gave his famous line, “where we’re going, we don’t need roads.”

The Internet is filled with jokes about how the year 2015 was depicted in the Back to the Future series.  Flying cars taking precedent over road bound vehicles, hover boards replacing skate board, teenagers wearing silly silver hats and other gaudy costumes. Yeah we didn’t achieve any of that (thank god we missed out on that dress style) But remember, back in 1985, we didn’t know about any of that either. This “future” was not presented to moviegoers until 1989 – the year Back to the Future II  came out.  So it’s sort of a misplaced association to unite those scenes with the thirty-year movie anniversary. But I digress.

Summer of 1985 – it was one of my favorites.  Fresh out of the 8th grade, the exciting future of high school was a couple months away and in between was some kind of magical moratorium that remains forever in my memories.  First dates, first buzzes, first…well, a lot of firsts.  Anyway, a big part of that summer was going to the movies. We would pay a cheap price for the first movie of the day, see it, and then cross over the ropes into other theaters.  One day I was at the theater complex for twelve hours, from 11:00 AM to 11:00PM.

I just want to give a run down of some of the other films I saw that summer.  They might not have had the same appeal as Back to the Future, nor did they point to this wonderful current year of 2015, but they deserve an honorable mention. Okay, some of the films I am going to mention are downright silly, but oh well!  They served me well for that innocent time of my life and so I am thankful for their existence.

Yeah so, I remember very little about this movie.  In fact, I remember nothing about it.  I only remember that I saw it and then stayed around for the next movie that was to come on after this was finished.

But lookie! It’s free on YouTube.  I wasted $2.50 on this movie when I could have waited thirty years to see it free on you tube!

This is the movie they were showing after “The Secret Admirer.”  Again, I remember very little.  It had John Travolta as a reporter for Rolling Stone magaizne and Jamie Lee Curtis as an aerobic instructor at a health club.  They did stuff.

Once again, I remember very little about this movie. I just remember Chevy Chase being in another country and declaring out loud to a crowd “We’re Americans!”  I think he was then tied to post, set on fire, or something.

And wouldn’t ya know it – it’s free on Youtube! Another two dollars and fifty cents I wasted thirty years ago.

Return of the Living Dead

This movie I remember.  I remember loving it! Went out and bought the soundtrack too!  Who could forget this song:

Here’s the third movie I could have seen for free had I waited thirty years! I do remember this. I do remember liking it. Why did I like it? I was young.

And look why I just discovered.  The mother who had The Heavenly Kid’s son?  She would go on to be the mother of Malcolm in the Middle!

I remember this and I still love it. I own it and rewatch it every few years.  Actually, I don’t think I’ve put this on for quite a while.  It’s time to schedule it in.

John Candy got a bad case of sunburn.  He and his family settled in to the wrong cabin/cottage.  That’s about all I remember of this flick.