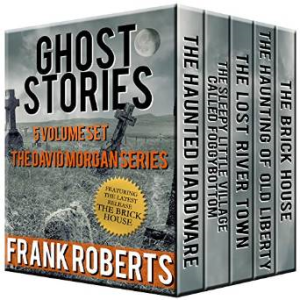 Houses in need of love and renovation – historical tales surrounding such houses and the ghosts that come with them. This is what readers encounter in Frank Robert’s anthology: Ghost Stories: 5-Volume Set (The David Morgan Ghost Series)

David Morgan has a love for old buildings; churches, stores, theaters, houses, inns, etc. He sees the beauty that lies hidden underneath the savagery of time. Being a skilled carpenter and all around handy man, he embarks upon projects to restore these buildings to their original state, preserving the historical value, quirks and all.  Now you can’t go through the process of demolishing and reconstructing such historical buildings without churning out few ghosts! Exhuming spirits is all part of the job; it comes with the territory. And there is no better man for the job than David Morgan.  Ghosts have been visiting him ever since he was a little boy.

I can tell you one thing: Author Frank Roberts had fun writing these stories. I have never met the man and no, I can’t read his mind. But I can (and did) read his work and it is clear that he is at home in these tales. He loves the building restoration business and all that comes with it – the blueprints, the multiple parties that are 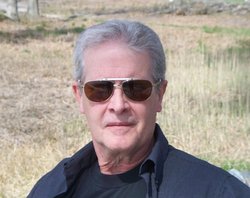 involved in the planning, the camaraderie of the workers while on the worksite.   Likewise, he enjoys learning about local history. His invented accounts of community life from eras long gone are quite intriguing; readers learn what gave these fictional buildings life.  Finally, he loves a good ghost story, as do I.  And there are plenty of interesting ghosts floating about in his stories.

Sprinkled throughout the pages are themes of Americana. These include customs and traditions, such as Memorial Day parades and Fourth of July picnics.  But when hosting such events, watch out!  You never know if a ghost of a soldier might show up to give salute, or if a ghostly brass band starts to perform deep into the nights preceding the celebration. Then there are accounts of early colonial life and the struggle to forge out an existence in the harsh elements. Harsh times can produce some violent characters, and don’t be surprised is these characters reappear a century or two later.  In one story, David is called upon to restore an old-time theater that, when completed, will be running the classics, such as Laurel and Hardy films. All will go well so long as his restoration efforts are not upstaged by a deceased actor from the days of yore!

As previously mentioned, the ghosts in these stories are alive and colorful! (Well, maybe not “alive” but you know what I mean.) There is a ghost of a little girl that resides in a tree. There are spirits trapped inside mirrors. There are vengeful ghosts that seek to harm the living.  And let’s not forget the spirit of a dog and the ghostly antics of a deceased monkey!

As intriguing as the spirits in these stories are, it is the spirit OF these tales the captures the reader’s interest.  This “spirit” is made up of everything I have written above – local histories, Americana, and a deep seeded love for the material.

There are some drawbacks to this series. It would benefit from another round of editing in all areas: grammar, style and content. In numerous places throughout these tales, the plot derails.  This is especially true when the stories come to completion; some of these stories “end” but do not “conclude.”  Readers are left with loose ends, and in one case in particular my sole reaction was along the line of “WTF??” Too often, the narrative gets bogged down in the nitty-gritty details of building reconstruction.  What is written is fine for readers who are fans of the home remodeling show “This Old House”, but for lay people with little knowledge of carpentry, the narrative can get a bit daunting.  Finally there are frequent instances of typos and awkwardly constructed sentences.

Now get this; I choose not to take off too many points for the grammar errors and occasional dents in the story structure. Being an indie author myself, I know how difficult it is to have a book edited.  I have heard that one should NEVER edit their own work. However, sometimes “one’s own self” is all that a struggling writer can afford when it comes to editing. Hell, I’ll bet those reading this blog entry have stumbled across some typos that I have made.

So I ask prospective readers to give these stories a chance in spite of the imperfections.  They come from the author’s heart and soul, and these are two wonderful places for any story to originate.

These five stories are published both as separate books and as a collection. I have already posted the link for the collection in the first paragraph.  Below are links for each individual story. 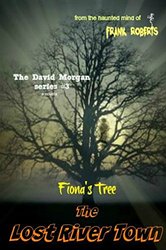 The Haunting of Old Liberty: Where Not All Performances are Live (The David Morgan Series Book 4)

The Brick House: The Curse of Hope Island (The David Morgan Series Book 5) 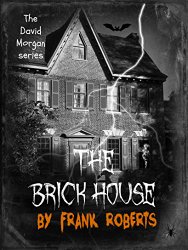 Frank Roberts frequently visits and posts at my Haunted House Facebook page. Stop by and say “Hi” to Frank!  (And like my page if you haven’t don so already.)