The Legend of Hell House, is considered by some to be a classic haunted house   movie.  It is based on Richard Matheson’s book Hell House.  Matheson is the author of several other books that were later turned into films, including The Shrinking Man, What DreamsMay Come and A Stir of Echoes. Alas, I have not yet read any of his

books. I will fix that very soon, beginning with the reading of Hell House. I already know that I will enjoy the book much more than the film. I know it with in every haunted and demented bone in my body!

That being said, I did enjoy watching The Legend of Hell House. Well I enjoyed most of it. Some of it? Nah, more than some. Definitely more. It’s just not the best haunted house flick out there. For instance, I prefer The Haunting to this film. 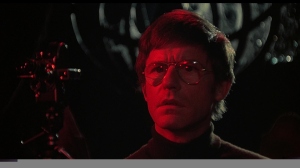 Much of this review will compare and contrast the two films. This is because they are similar in many ways. In both films, a group of people occupies a haunted house as part of a scientific study of paranormal phenomena. Both films have four occupants: two men and two women. A male professor leads both groups. In each movie, two of the four occupants were selected to participate in the study on account of their natural sensitivity to paranormal activity. In The Haunting, Eleanor Vance has experienced telekinetic phenomena and Theodora possesses E.S.P. In The Legend of Hell House, Florence Tanner is a “mental medium” while Ben Fischer is the “physical medium.” As for the differences between the two “media,” your guess is as good as mine.

The Legend of Hell House is like The Haunting on – steroids? No, not quite. That would be today’s slash and gore fests. On – LSD? Closer, but that metaphor is too strong as well. Maybe it’s The Haunting on some high-grade THC-laced concoction. That’s what I’m going with and I’m sticking to it!

What do I mean by this? Well, mood-setting shots and chilling sound effects provide the scares of The Haunting, along with a story based on psychological drama. The Legend of Hell House has all of this as well and a lot more. But “more” does not equate to “better.”

Don’t get me wrong – I enjoyed all the haunting events that constitute the “more”. 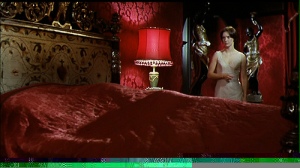 The movie is filled with these terrifying scenarios. One after another, they come. There is never a dull moment. And herein lies a paradox: these fast paced scenes are the strengths and weaknesses of the film. On the one hand they establish suspense. What crazy thing is going to happen next?   On the other hand, viewers are never really given the chance to settle into Hell House and make it their two-hour home.   The Haunting gives its viewers time to absorb the Hill House and its inhabitants. The host, Dr. Markway, gives a tour of the house, during which the camera focuses in all the things that make the mood; the library, the nursery, the rickety staircase, the statues. While Hell House has the gothic furnishing and macabre décor, but much of it is lost in the commotion. Also, viewers get to know the characters of The Haunting well before the haunting happens. In The Legend of Hell House, viewers are still trying to figure out the characters’ motives long after all the scary shit hits the fan.

So there’s the good (the haunting events), the bad (the pacing), and… what’s the ugly? Answer – the ending. We finally learn the motive for the evil that lurks within Hell House. This is when I sat back and said “Seriously? You gotta be kidding me!” Yeah it’s that lame.

But understand, this is not a bad film. It’s just not great. It’s almost good – very close to being good. It definitely has its moments, and those moments are intriguing enough for me to recommend this film. Just don’t delve into this film with inflated expectations.