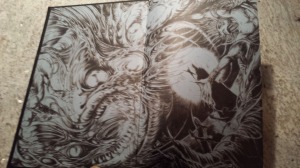 Here is my second piece on the macabre author HP Lovecraft.  In the first article, I wrote that Lovecraft was not a teller of ghost stories.  Instead of retelling what is essentially the same story – a spirit of the departed comes back to haunt a house – Lovecraft develops uniquely twisted tales that churn out equally bizarre entities.  This is true for the three stories I reviewed previously as well as the two tales I am reviewing for this post: The Strange High House in the Mist and Dreams in the Witch House.

This is not to say that the inhabitants of his strange houses are prohibited from taking on some of the attributes of the   standard apparition. They may possess ghostly features that are familiar to readers of paranormal lore. In the two stories that I am reviewing in this post, entities appear and disappear. They walk within the sky.  And yet, some of these entities appear as deities rather than ghosts. (See Nereids and Tritons.)  Then there’s Brown Jenkin, who is a familiar that takes on an  appearance that is vastly different from the average, ghostly white spirit. 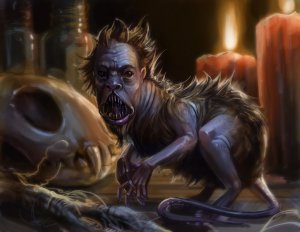 Witnesses said it had long hair and the shape of a rat, but that its sharp-toothed, bearded face was evilly human while its paws were like tiny human hands. It took messages betwixt old Keziah and the devil, and was nursed on the witch’s blood—which it sucked like a vampire. Its voice was a kind of loathsome titter, and it could speak all languages 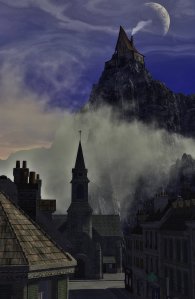 So once again, Lovecraft’s entities march to the beat or their own cadaverous drum. Ah but wait! There is something else that sets these two stories apart. Not only are the houses inhabited with beings of myth and the occult, but they also possess portals to alternate dimensions. “The Strange High House in the Mist” rests on top of a mountaintop where the front wall “stood flush with the cliff’s edge, so that the single narrow door was not to be reached save from the empty aether.” Nevertheless, “beings” do come-a- knocking; beings that materialize right out of the misty air of the sky, beings that invite a mundane man along on their heavenly parade. Within the bizarre architectural angles of The Witch House lurks an unearthly geometry that gives way to “spiral black vortices” that lead to the demon “Azathoth, which rules all time and space from a black throne at the centre of Chaos”

In a way, these houses can be seen as way stations on the edge of Heaven and Hell.  The mountaintop house opens its doors to celestial deities whereas the witch’s house unlocks demonic dimensions. However, “Heaven and Hell” is too simple of a dichotomy; analytically lazy.  Although frequented by immortal heroes of myth, “The Strange High House in the Mist” is not without its demons.  Dark shadowy creatures come to the house. Sometimes they knock on its door, but other times they try to sneak in through the windows.  In the case of Dreams in the Witch House, the pathway into the demonic dimension is not only open to evil or unrepentant souls. It is obtainable to the mathematical genius that can navigate within the geometric and physical laws of higher realms (although the protagonist does get pulled into this dimension unwillingly and repeatedly though a series or dreams)

What can be said about these houses is that they lead from an ordinary dimension to the extraordinary, whether for good or evil; whether by scientific or spiritual means.  Jim Morrison, based on the ideas of William Blake and Aldous Huxley, had this to say about his famous rock and roll band:

This is what the houses in these stories represent: doors that lead to the unknown. However, do these doors swing both ways? In The Strange High House in the Mist, the protagonist returns, but he his soul has remained behind. Is this a good thing or a bad thing? Read the story and decide for yourself. Read the Dreams in the Witch House as   well to learn of the fate of its protagonist. These are good reads. Challenging, heavy on the prose, but well worth it.