She aged prematurely. Weary with a voice ridden with sighs, the spinster accepts these conditions. Still, Rosa wonders if all this was preventable. Perhaps if certain precautions were attended to, she could have avoided the happenings that solidified her fate on that night before Christmas many years ago, circumstances that make her story all too fitting for the literary category of tales concerning Christmas ghosts and haunted houses.

Welcome  to the second  edition of Classics: – A Chilling Ghost Story for a Chilly Night. The title of the story for this edition is Horror: A True Tale, written by John Berwick 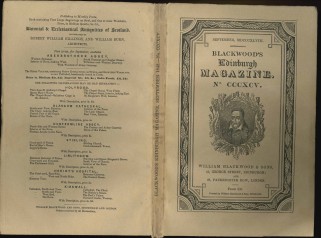 Harwood way back in 1861 for Blackwood’s Edinburgh Magazine, Volume LXXXIX, No 543. (see the accompanying photo for an example of what this magazine looked like). This piece is an example of a traditional Christmas ghost story, so appropriate for this wonderful time of the year!

In the first edition of this series, (The Beckoning Fair One by Oliver Onions), I explain my intentions. I’ll revisit a paragraph that summarizes these intentions well:

It is my intention not so much to review these stories as it is to walk through them much like a fearful visitor might walk through a haunted house. Hopefully I can capture the atmosphere without giving too much away. But while on the walk, there will be time for analysis here and there and room for stray thoughts that creep about like watchful specters.

I will proceed according to the objectives specified in the above paragraph. First I’ll describe “the traditional Christmas ghost story” and then I’ll place Harwood’s chilling tale within its context and let the walk-through begin.

So, settle in, sit back and come with me inside a classic Christmas  story. We’ll wander into “certain” depths. As for the depths of “uncertainty”as to what scared this woman  so much on that festive yet fateful holiday night, it’s up to you to plunge deeper into her nightmare by reading the story  yourself. You can read it here for free – Horror: A True Tale by John Berwick Harwood.

The telling of ghost stories on Christmas Eve was a common tradition back in them there days of yore. Many authors captured  this tradition in the stories they penned. Such stories usually begin at a Christmas gathering. Guests sit by a fire, their glasses are filled with wine. They have been well fed, their minds are a bit hazy, and they  listen to the “teller” as s/he speaks of a fanciful tale of witches, goblins, or sprites. Sometimes the story spoken by the narrator is the story that the author wishes to convey. The story itself might have little to do with Christmas activities, but the telling will take place on the Eve of the holiday. Other times the story told by the narrator is only a catalyst  for the horror that will take place to one of the listeners after the telling. Very likely, it will occur after the party winds down when the spooked listener prepares for bed. Such is the case here in Horror, a True Tale.

In my article Christmas Ghosts and Haunted  Houses I make the case for the “Christmas  Haunted House”, a recurring theme in Christmas  ghost stories. This is the place where the festivities  are taking place. It’s fun to listen to ghost stories in a place of warmth. The lighting might be limited for the sake  of atmosphere, but there is light , unlike the darkness that exists on the other side of the walls, outside, on a cold, windy night. Such weather will not be ignored  by the secluded party guests. Its winds will howl and tree branches will scrape against the eaves. The cold face of frost will press against the windows. All this adds to the scary entertainment. Fun additions. An added soundtrack accompanied by some visuals. Little  do they know that they are not only inside a Christmas ghost story but, worse yet, they are inside a Christmas haunted house. Such a house will gladly accept what I had called “winters symbolic doom” inside it’s walls. Once a place of cheer and stories, later a place to harbor the scary things of darkness that were previously confined to fancy. This is what happens to Rosa’s house.. And poor Rosa will be its victim.

All this anticipation – setting things up for the climatic event. This is 90% of Harwood’s tale. It’s all about the journey to the resolution, and this is quite all right, for any thoughtful traveller will tell you that it’s the journey itself that counts most.

Rosa, both lamenting and accepting of the life she led, robbed of love  and companionship, remembers all too well that fateful Christmas party in her father’s mansion; the shortage of sleeping  chambers, her strange godmother for whom she gave up her room. She will tell you about what went down. She will tell you how she  ended up sleeping in that chamber the servants whispered about. And you will listen if you are a curious person. But of course you are!

She will tell you of the tales told around the fireplace where the Yule’s log blazed, tales that caused her soul to shiver. Such a shivering would persist later that night as she escorts her strange godmother to the safe bedroom that was once hers but is no longer. The godmother  is a bit too knowing, and she offers that maybe they should share the room. Rosa refuses and walks the dark corridors into a wing of the house she had rarely entered , certainly never at night by candlelight. She will encounter those classic haunted house staples, such as the gallery with portraits of long since dead relatives with following  eyes. She will pass the armors of “once-upon-a-time knights” that stand menacingly in the shadows. All to get to a strange room where she will be alone. Or will she?

She will  imagine the things from the fireplace  stories joining her in her chamber. Will it be a walking corpse, a lifeless  skeleton?

Never trust a strange sleeping chamber when you’re inside a haunted house story. Had she known she was but a character inside a chilling tale, she would have known better.

This is as far as we will tread, readers. Tread further, y’all. Read the story. Join Rosa. Don’t leave her all alone.