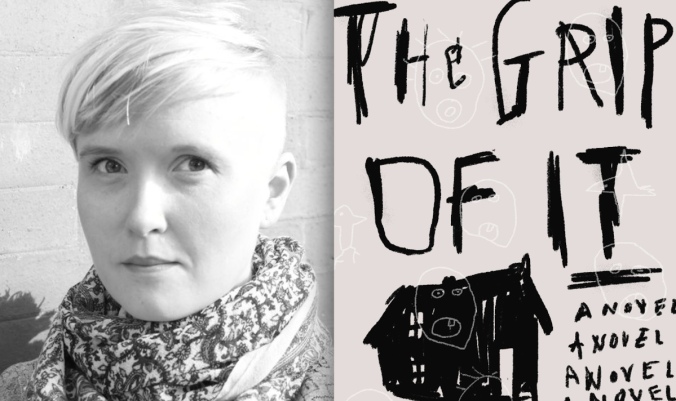 Let me begin with a disclaimer. I am a Chicago guy.  The author of the book that is up for review – The Grip of It – A Novel,  resides in Chicago. Therefore I am already in love!  All the authors of my other favorite haunted house novels live elsewhere – Maine, California, England, etc. Many are long dead, hopefully living in some heavenly realm.

Author  Jac Jemc received her MFA from the School of the Art Institute of Chicago (See http://www.jacjemc.com/about/). She frequently attends/conducts writing conferences and seminars throughout the Chicago area. A colleague told me she used to work at “Such and Such” indie book store over there in..not only did I forget the name of the store, but I forgot the neighborhood as well. For what it’s worth, he did point north east! Is she a transplant or native born? I don’t know, but I get the feeling that “native born” is just too much to ask for.

Kidding aside, all that Chicago stuff is not why I appreciate her work. I admire her creative approach to the haunted house story; her feat at widening its field into areas previously unexplored. I admire her for avoiding clichés and experimenting with the new.  I admire her ability to tap into the elements of psychological horror in ways that have never been done before.

Quite often, the physical structure in a haunted house story represents something else within the parameters of the narrative. It could be something as large as a kingdom (The Castle of Otranto ) or a familial lineage (The Fall of The House of Usher). Or it might represent the inner workings of a tormented mind (Maynard’s House). On other occasions, it stands for something far more complicated and abstract (House of Leaves). This last example best exemplifies The Grip of It. The house in the story represents a struggling marriage, the complications that come with starting a new life, and the fissures of silence that tear at the foundation upon which a life if built.

As is made clear in the preceding paragraph, The Grip of It is filled with a whole lot of S & M.  No, no, not Sado-Masochism. I mean “s”ymbols and “m”etaphors – Hidden rooms, scratching noises, spreading stains, buried bodies; don’t they just sound darling?  Gotta love the S &M!

James and Julie move away from the city to a new house in a new town. That’s right kids (the couple in the book are much younger than I am so I can call them that), run from your problems! They will never rematerialize in a new home in a new environment, will they? Oh yes they will, in a very haunting way.  Jemc sees to that. As their mistrust of each other increases, so do the uncanny happenings in and around their house.  Does one set of problems beget the other?  Does A affect B, only to have B  affect A? Or are A and B one in the same?

The book is beautifully written. A reader flows through  the pages with a sense of rhythm, never to be deterred by the overall brilliance of the structure. With one exception. The book alters perspective: one chapter is from James’s point of view and the next is from Julie’s.  In either case, the writing is always in the first person.  But sometimes, James will get two chapters in a row. And so will Julie. A reader must ask “Who is this ‘I’ that I am encountering this time around?”  Before embarking on a chapter, I needed to scout the terrain of upcoming words and seek out the third-person spouse in order for me to know whose head I currently occupied. Ah! Up ahead the “I” is wondering where James went. Therefore, I am reading from Julie’s perspective.  I got tired of doing this after awhile.

The Grip of It might fit into the classification known as postmodernism. I say that and yet I only have a hunch as to what defines that movement.  Ah but it seems so right! And, I think that “not having a grasp” of a definition is exactly what postmodernism is all about.  Certainly James and Julie are at a loss of an explanation.  They struggle over “The Grip of it”