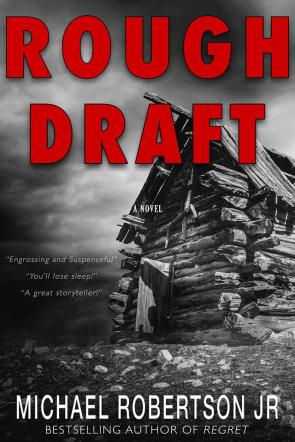 Sometimes Facebook ads really do work. Every once in a while (sometimes its more like twice or thrice in a while),  a post will appear in the Facebook newsfeeds; not a friend’s post, not a post from a liked paged or a group to which one belongs, but from a seemingly foreign source.  In small letters under the post’s heading, the word “sponsored” appears.  This is how I discovered Michael Robertson Jr.’s 2014 novel Rough Draft. Had it not been for the cool looking picture of a log cabin against a gray sky and murky background, I might have passed it on by. The picture caught my attention because, see, I already had this month’s theme in mind – haunted cabins – when this ad appeared in my newsfeeds. So I clicked on the post, and I believe it led me to it’s Amazon page, where I discovered….Yes! This IS a book about a haunted cabin, just what the doctor ordered! (Does anyone still you that expression? Well I did just now, and I am someone!)

Thankfully, this was not some “rough draft” that an author was furtively trying sell as a finished work. (In these days of Amazon scams, you just never know). I confess I don’t like the title. But it does make sense in the context of the story. I do, however, like the taglines that describe the skin of the story:

Three strangers. An abandoned cabin in the woods. And a chilling one hundred year-old mystery that doesn’t want to be solved.

A mysterious blackmailer forces three authors to meet at cabin and write a “rough draft” for a prospective horror novel about the cabin, the surrounding woods and a nearby town. They HAVE to complete this assignment – in one weekend – or face the consequences.

And so, the authors travel across the country and arrive at…gee, I forgot the state, Colorado perhaps? Anyway, two meet at the airport and ride together, where they then have to journey across dangerous terrain to find this isolated cabin in the snowy mountains. They pass over a flimsy bridge, hoping the car can make the crossing. Once they arrive at the cabin they find the third author waiting for them. Now they are three – Robert, a good-looking, smart-alecky kind of guy, Vic, a woman who fools her fans into thinking she is a male, and Finn, a geeky Zombie apocalypse story writer. What happens next? Lots of stuff. Some good stuff. Some disappointing stuff.

The overall atmosphere of the story is delightfully chilling. The build-up to the mystery is done very well. Some scary shit goes down. As it turns out, the authors don’t need to develop a fictitious account of a haunting; the place is already haunted. During the night, their cars are stolen or damaged. They are truly abandoned. But who could have done such a thing, there is absolutely no one around…not another living soul for miles and miles . Things begin to go bump in the night. Hell, the whole cabin shakes at one point. Could this have anything to do with the strange story that they had heard before making their way into the mountains? (One hundred years ago, all the residents of the nearby and former coalmining town. At one point Robert leaves the cabin to go exploring, only to discover mysterious figures weaving in and out of a trail of trees. He then makes a startling discovery in a nearby cave!

Kudos to atmosphere and tension-building drama, the laying out of the mystery, the casual influx of ghostly happenings. But alas, the mystery doesn’t go to a place worthy of the compelling setup. In sum, it falls into a “good guys vs. bad guys” trapping that, IMHO, is a quite lame. Also, there is this other flaw; or maybe its “three flaws”. At least two. Two very noticeable and damning flaws. I refer to the characters, especially Robert and Vic.  Robert is shallow and somewhat smug and yet he is presented as this likable hero. Likewise, “Vic” is an annoying “damsel-in-distress.” At one point, Robert and Finn are very careful not to accuse her of being over-emotional so as not to come off as sexist. The way I read this, it’s really the author, Michael Robertson Jr, that fears that he has written his character much too stereotypically (and he has,) so he adds this part only as if to say, “See, I am wary of stereotypes. I don’t do them.” Oh but he has.

So, what happens to these three characters? Do they become friends? Lovers? Enemies? Dead? That is for you the prospective reader to learn. I cringed at the outcome but who knows, maybe you will find the resolution quite enjoyable.

In sum, good start, great tension-building, atmospherically frightening. But it digresses into the land of the banal, dragging along some very weak  characters.

In the article Beyond the House – An Examination of Hauntings within Alternate Structures, I discuss various themes that may or may not occur in haunted cabin stories.

I name the first theme “Outposts on the Edge of the Unknown.” By this I mean that the haunted cabins of stories are surrounded by all kinds of spookiness. Sooner or later, that spookiness will find its way to the cabin. This theme certainly plays out in Rough Draft. Quite often the haunting begins outside. Arrows are found pierced into the front door, as if a phantom archer was taking aim at the cabin.  There are spirits in the surrounding environment and at one point in the story….ah nevermind, I don’t want to give anything away

The second theme I call “Isolation”. Simply stated, cabin horror stories frequently feature dwellers that are trapped in their location with little to no communication with the civilized world. In Rough Draft, their cars are damaged or stolen. Their generator often fails to work. They have laptops that are connected to a private network – the network that is set up by the mastermind of their unfortunate situation. They do not have general Internet access. The third theme, “Micro-Haunting,” states that the haunting is symbolically simple and that haunted cabin stories usually only feature a few characters. This is certainly true in Rough Draft. The fourth and final theme, “Solitary Confinement”, does not apply since this theme pertains to the solitary cabin dweller.

Stay tuned for the next haunted cabin feature. I know which films and books I will be reviewing but I haven’t decided on the order yet, so sorry, I can’t say that the next post will be a review of Blah Blah Blah. But the educated horror fan should be able to guess at the movies I have coming down the pike. Either way, you won’t be disappointed!