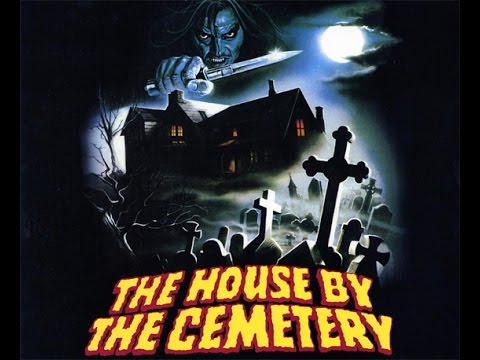 Italian Horror. How I want to get to know thee!  I have heard some great things about you. You have style, so I’m told.

To be honest,  we have gotten together a couple of times.  Our first date was Suspiria by Dario Argento. Aside from a few minor issues, I thought it was a good film. And I witnessed that “style” that I was told to look for. All in all, it was a good first date.  Our second meeting was Demons by Lamberto Bava but produced by Argento. This date wasn’t as good. Yeah the style was there, but there was a lot missing.

Let’s talk about our most recent date; The House by the Cemetery by Lucia Fulci.  It went horribly, didn’t it?  And I so wanted for us to have a good date.  It didn’t have to be a great date, just good.  But it wasn’t.

I really did want this to like this film. I was hopeful for about 10 minutes.  But on the eleventh minute – down, down down goes the film.

Here’s a quick summation of the plot. Dr. Normal Boyle moves his family into a house in New England. There he will continue the research of his colleague who had committed suicide.  Turns out, this colleague was researching a notorious killer referred to as Dr. Freudstein.  And yes, Dr. Freudstein will do some killing in this film. Meanwhile, the ghost of a little girl appears to little Bobby, Boyle’s son, warning him to stay away from this house.

So what’s wrong with the film?   These things.

There is a lot of gore in this film. This neither thrills me nor upsets me. It is just there.

Is there anything good about this film? Sure!  The atmospherics are damn good!  The house looks scary on the inside and out.  Establishing shots of the house are excellent. In fact, there is a lot of decent camera work and photography direction. There is a scene of a little girl looking out the house window. The camera zooms and we the viewers realize that we are looking at a painting of the house. They pull off these effects very well.

In sum – good filming in and otherwise bad film. But guess what? I’m still going to court Italian Horror. Maybe I’ll stick with Dario Argento for now. Sadly, I don’t think he has made any haunted house movies (but I could be wrong).  But I’ll just appreciate him for the general thrills and scares.