Goosebumps! (Uh…what?)  You heard me. Goosebumps!  (I don’t get it). These little shits crawled all over my skin as I read this delightful tale. And when I listened to an audio arrangement of the story, with creepy sound effects and all, these bumps honked like a mudda’ goose!

The story I am referring to is “Smee” by A.M Burrage, which was originally published as part of a collection in the book Someone in the Room, 1931.

(To  read it online. Check out  http://www.scaryforkids.com/smee/ )

(To listen to the story, check out this narration from David Lewis Richardson

(Was it really so scary that if caused goosebumps?) Well, it was scary. Scarier than some, less scary than others. (Was it, I don’t know, touching?) Well, people touched a ghost now and then, it that’s what you mean. (What I mean is, “What’s with the goosebumps?!”).  The overall concept of this story gave them to me!  Twelve friends playing a hide-and-seek type game inside a huge, dark house, and then suddenly – there is this mysterious thirteenth player that hides with them!  This description alone should be enough to tickle a whole assortment of inner senses.  But then there’s more.  To complete the story is to witness multiple rounds of this game; numerous chilling adventures to court your most precious fancies.

The story takes place on Christmas Eve.  It is a story within a story.  Tony Jackson is forced to explain to his friends why he wishes not to partake in their post-dinner, hide-and-seek game. To explain his hesitancy, he relays a story of a Christmas Eve past, where, after dining, he and eleven friends play a game called “Smee!,” which is similar to hide-and-seek.  The name is based on the phonetic similarities to the phrase “It’s me!” One person per game bares the title “Smee.” No one knows the identity of “Smee” except for the one that chooses the card that assigns that person the title.   “Smee” then hides and the others seek. When a seeker encounters another player, s/he calls out “Smee?” If the other player replies with “Smee!”, the seeker moves on.  When the real “Smee” is found, s/he is silent when asked about his/her identity. The finder then joins Smee in hiding and waits. Soon, all the players except for one will be hiding with Smee.  The last player to find “Smee” (and the rest of the party) is the loser.

Poor Jackson had a frightening experience playing that game on that particular Christmas Eve.  It just so happened that a ghost had joined in the game!

At the beginning of every game, the one who is “Smee” leaves the group to hide. Now, wouldn’t the players see the one who leaves? If they were not witnesses to “Smee’s” departure, wouldn’t they still be able to deduce the identity of the absent player by process of elimination? In order for this game to work, the house had to be pretty damn dark so that no one can see each other!  And so it is in this tale. Also, the house has to be big. Once again, the house in the story meets the requirements.  There are many hiding places in the numerous rooms and corridors. The host warns that, due to certain constructional patterns, some of the areas in the house can lead to danger if one is not careful, especially when roaming around in the dark. Now, isn’t this just the perfect setting and situation to add such haunting delights?

Let me refer back to the article I wrote several days ago, Christmas Ghosts and Haunted Houses. In the article, while borrowing from other sources, I describe the setting of a Christmas Haunted House.  I rephrase a section of Keith Lee Moris’s article:

“Winter’s ability to capture our imagination is at its strongest precisely when we are the farthest slightly removed from its more harmful elements.”

Let’s say, perhaps, that our frolicking friends are feeling “warmly vulnerable” during a ghost story session at a Christmas Eve gathering. Let’s remove the last visages of safety and allow winter’s symbolic doom to come inside. It’s warm. Festive. Have a drink. Merry Christmas! Fires. Games. Ghost stories. And then – real ghosts haunt the house. Frightful! This is what I would call A Christmas Haunted House.

In other words, A Christmas ghost story with a haunted house usually begins in a warm house where a festive party is taking place. This party distracts the characters from the darkest elements of winter – in the beginning. But as the story unfolds, the harshness of the season creeps inside (symbolically), often in the form of a ghost.

Stories of ghosts invading Christmas celebrations are perhaps reflective of our ancient ancestors’ struggle against the forces of nature at winter solstice.

In my article, I argue:

During the festive solstice celebrations, the lingering darkness and the bitter cold continued exert their powers.  These forces surrounded their fragile, festival fires, where the celebrants sought warmth and light.

Soon the fires would be extinguished. But the darkness and the cold temperatures would remain.

“Smee” certainly deals with the “dangers of darkness” theme.  Here we have a group of 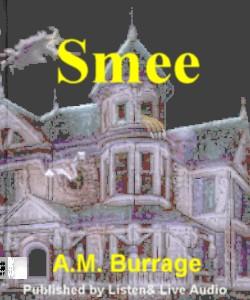 friends celebrating Christmas – a holiday known for its colorful lights. They have already dined and are feeling quite cheerful. They then test their fragile bubble of festivity by eliminating the light. They find themselves in darkness, which is always present underneath the light. And with the darkness comes frightening entities.

There is very little mention of the weather in this story.  We truly don’t know if “the weather outside is frightful.”   However, during the game, one of the players mentions that she would rather play a quiet game beside the fire where it is warm. So to a small extent, cold temperatures contribute to the overall sense of gloom.

“Smee” offers the ultimate Christmas haunted house. It is dutifully dark and sprawling with passages. Complying with the archetypal Christmas ghost story irony, the frightful exploration of the house is all part of a jovial, holiday game.  “Oh what they find is frightful, but the story is so delightful.”  Yes it is! Turn on your Christmas/holiday lights, shut off all other lighting and listen to this story.  It will be fun!

2 thoughts on “Review of Smee (A Christmas Ghost Story By A.M. Burrage)”