The Cat and the Canary features a dead millionaire, greedy relatives, a strange maid, a psychotic killer and…Bob Hope? Yeah its got all “them peoples” along with a creepy old house, a coveted inheritance, murder and mayhem, and a lot of hilarious one-liners from the nervous yet witty house guest Wally Campbell. You guessed it; Campbell is played by Bob Hope. It’s horror mixed with comedy.

Here’s the nuts & bolts of the story. The late Millionaire Cyrus Norman did not trust his heirs. No he did not! So he had these weird ass conditions concerning the distribution of his estate. The reading of the will does not take place until ten years after Cyrus’s death per his wishes. When that ten year anniversary finally comes, the prospective inheritors gather together in his huge home in the Louisiana bayous for the midnight will reading. Along with the lawyer and the maid, there are also three women and three men. The six are the last remaining descendants of Cyrus and candidates for the passed down fortune.  One of the women , Joyce Norman, played by Paulette Goddard  (former wife of Charlie Chaplin) wins the prize. But there is a catch – which brings us to the second 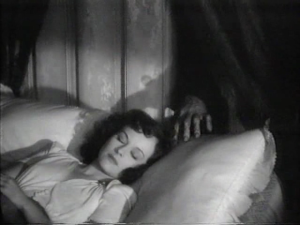 odd stipulation of the will. If the sole heir, who in this case is Joyce, is proven to be mentally ill within 30 days of the reading of the will, then her claim to the fortune is forfeited and Cyrus’s estate gets passed down to a second heir. The identity of the second heir is withheld; the papers are protectively sealed in an envelope that remains in the possession of the lawyer. Now, we viewers know that there will be a mad rush to drive poor Joyce insane, and that this rush won’t be extended over a thirty day period. The tricks and misdeeds against the woman will all take place within the house over the next several hours by one or more of the scheming others that are desperate to lay claim to the inheritance. See, they are stranded there. They all came via paddle boat on the rivers of the bayou. The boat guy won’t taxi his boat after hours, so they all must spend the night in the creepy house. Spoooooky!

Oh yeah, the creepy maid says there are spirits in the house.

And oh yeah again, there is an escapee from the asylum running around the property.

And oh yeah for the third and final time – wasn’t that funny how I linked the words “ten years after” to the famous rock band of the same name?  Back up there at the beginning of the second paragraph, I linked….oh never mind!  Read on.

This movie is a remake of the 1927 silent film of the same name. Furthermore, both films are based on the 1922 play by John Willard. The play reveals the reasoning for the title of the story. Cyrus West (not “Norman”, in the play his surname is West) says of his relatives, “(They) have watched my wealth as if they were cats, and I — a canary”.

I really don’t have much more to say about this film other than that I enjoyed it. But I must confess – this is the first Bob Hope film that I have seen. His humor might be dated, but to me it is fresh. In the film, the maid says to Wally (Bob Hope) something along the lines of “I sense spirits all around you” to which Wally says, “Can you grab a few them and throw them in glass with ice?” THAT is funny! Yes it is, don’t argue with me! Without Hope, this film would be only be so-so. Sometimes you just have to have “Hope!”

Here’s a side note: I saw this film on Saturday, Oct 17, 2015 on Svengoolie on MeTV. Sven’s the guy that shows me many of these old time haunted house films. I love “Da’ Sven” and you should love him too!

Do you have MeTV in your area? No, it’s not a cable station. It’s a regular station on terrestrial television. You over here, do you have MeTV? You don’t? Aww, I’m sorry. But wait you..over there… do you have access? You do? Great! Turn on Svengoolie on MeTV’s Super Sci-Fi Saturday night!

And to those who think that they do not have access to Svengoolie in their area, maybe you do. Check here:

To those outside the United States, I don’t think you have MeTV. I am sorry. I recommend taking this up with the United Nations.