William Castle – what a fun guy, dontcha’ think? When I first reported on him, he was fixing it so that a skeleton would “emerge from the movie screen” and float over

the heads of seated viewers. He called this the “Emergo” effect. The other night I decided to check in on Mr. Castle and see if he had done anything similar since then. Wouldn’t you know it? About a year after his emerging skeleton, he imbued movie goers with the ability to see ghosts. This effect he labelled “Illusion-O.”

The House on Haunted Hill is the second haunted house film that I reviewed. In that review, I describe how Castle, a great mastermind of publicity stunts , had distributed skeletons to movie houses that ran his film, instructing the theater operators to rig them up on downward angled wires so that they would

appear to float over the heads of movie goers during the pivotal scene where the skeletal remains of Vincent Price rise out of a vat of acid (allegedly!). Cool huh?   But his cool gimmicks did not stop there. They went on, film after film. When movie attendees went to the theater to see his 1960 film 13 Ghosts, they were given a “ghost viewer” which allowed them to see the same ghosts that the film’s main character saw when he put on specially designed glasses. In both

movies, the audience had a share of the scares that were inflicted upon the characters of the movie. With Castle, film became a platform for participatory art.

Before the film begins, William Castle appears on the screen. He is behind a desk in an office. A skeleton is taking dictation. He speaks to the audience and refers them to

their ghost viewers. He explains that at certain times throughout the movie the screen will turn blue (remember, this is a black and white picture). When this happens, the audience is to hold the viewer in front of their face. Castle demonstrates with a ghost viewer of his own. The top of the viewer has a blue-tinted lens and the bottom part has a lens tinted in red. 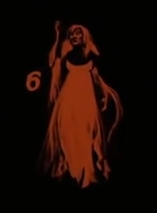 Obviously, the ghosts in the movie only appeared when one was looking through the red lens. Since the screen turned blue whenever the ghosts were featured, the ghosts became camouflaged when viewing the screen through the blue lens. Now, what happened when someone ignored the ghost viewer altogether and looked at the screen with his/her naked eyes? Did the ghosts appear? I have no idea. Being born in 1971 prevented me from witnessing this 1960 theatrical attraction. I can only assume that they did not. However, I can say that a ghost viewer is no longer required to see the ghosts of this film. They materialize in a fiery red tint. The screen

still turns blue as a caption appears at the bottom of the screen that reads “User Viewer.” But the naked eye is the only tool needed to see these creepy albeit cartoonish phantoms.

So, what’s this movie about anyway? The Zorba family is having trouble making ends meet. The repo people have come for their furniture. Poor Zorbas – forced to eat dinner on the floor!

However their luck suddenly changes. (Or has it?) Patriarch Cyrus Zorba is informed that he has inherited a house (and a furnished house at that!) from his dearly departed uncle. So he moves in with his wife Hilda, his twenty-something daughter Maeda and prepubescent son Arthur. There is a caveat to this deal. The lawyer that handles the transaction warns the family that along with the house and furnishings, they have also inherited eleven ghosts. See, long before the formation of The Ghostbusters, there was good ol Uncle Zorba, who was able to capture ghosts

from around the world and then “store them” in the house. Uncle Zorba dies, presumably by foul play. His ghost remains behind, so in effect, the family has inherited twelve ghosts. Why then is this film called 13 Ghosts?   Because, legend has it that Uncle Zorba is going to seek revenge on the one who killed him. If he succeeds, this will raise the count to thirteen. Does this vengeful killing occur before the end of the movie? Watch it and find out!

Oh yeah, there is another “thing” of interest the family inherits. Well it’s not really a “thing” but a person (see how I put “thing” in quotes in the previous sentence? See?). They inherit a maid and low and behold, she is played by no other than Margaret Hamilton who is best known for playing the Wicked Witch of the West in The Wizard of Oz. In fact, throughout the movie, little Arthur Zorba refers to her as a witch. Do you think the scriptwriters did this intentionally to pay homage to her famous role? Of course they did!

Let’s see, what else can I say about this movie? I will describe it this way – imagine if Rod Serling became the writer for Leave it to Beaver. 13 Ghosts might be an example of the end product. The father wears his Mr. Rogers sweater over his white

collared shirt. The mother has an overly rigid hairdo that is very fitting for the June Cleaver type. The little boy who, although he never says it, has “golly gee” written all over his young, curious face. While there is no older brother named Wally, there is the older sister named Maeda. She is prettier than Wally, so I like her better. As they go about behaving like the average 1960 television family, they are accosted by ghosts. A meat cleaver flies into the air and just misses Ward Cleaver Cyrus Zorba. The Beaver Arthur witnesses a ghostly lion-tamer lose his head inside a ghostly lion. Surprisingly, he’s not really freaked out by this. Rather, he seems in awe and he tells his mother. June Cleaver Hilda Zorba responds with a “that’s’ nice, dear” –

or..something along those lines. In her defense, when Beaver Arthur comes to her with this story, she is preoccupied with making dinner, or doing some kind of kitchen work – you know, the things the mothers of television did back in 1960.

Okay, I’m having too good of a time poking fun at this movie. But the truth is – I love this movie! I love the Zorba family and the haunted house they lived in. I love the cheesy ghosts. And 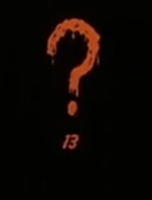 even though I did not get to use the “ghost viewer”, I love that whole concept.

And I love you, William Castle. R.I.P. I look forward to one day seeing all the clever antics you have going on up there in the heavens!