So I found about this film via some post on one of the many horror groups that I belong to on Facebook.   It’s a very recent film and I don’t think it appeared in any major theater close to me.  I rented it through iTunes.

The promotional website looked appealing.  It packaged this film well, presenting it as a wholesomely modest effort, sparing overblown effects for a strong attachment to characters and setting.  I was looking forward to seeing a film that utilizes simple but creative techniques; techniques seemingly reserved for impassioned directors/crews that are working on a film with a limited budget.   I’d say this film met my expectations half way.  I’d definitely give it an A for effort. I feel as if I owe this film a certain liking, for its heart was in the right place.  Therefore I hope that Director Ted Geoghegan understands when I say in a heartfelt way that his film needs improvement.

We are Still Here takes place in the countryside.  Anne and Paul Sacchetti are grieving over their college-aged son who recently died tragically in a car accident. Trying to escape the past and seeking new beginnings, they move to a big old lonely house in the country.  But it seems as if their son is “still with them”, hauntingly so.  Paul offers something like “yes, he’s still in our hearts”.  But Anne senses there is more to it tha 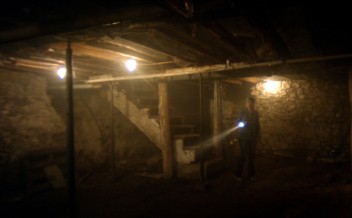 n that.  It’s as if his spirit has moved in with them.

Meanwhile, some creepy neighbors pay the Sacchetti’s a visit and tell them about the house’s horrible past.  The previous owners were burned alive. After a while, and after several disturbances, The Sacchetti’s invite friends of theirs to come stay with them. One of these friends is “gifted” and can commune with spirits.  Perhaps she can help them to figure out what is going on with their house?   It is later revealed that the house needs a family. Every thirty years, it releases its ghosts (of the previous owners) to extract vengeance on anyone who might be living there at the time.

This is Ted Geoghegan’s debut as a director for a feature length film. Thanks for the film, Ted. I did enjoy it. But let me offer some constructive criticism.

The establishing shots – very effective at setting the mood. This should not be understated. Still shots of the house at different angles, the countryside – all good. But they went on a few seconds too long.   The same holds true with the interior shots. Great camera work, especially that shot from behind the spider’s web! But again, the last several seconds of each shot should have been edited out of the film.

I liked the four central characters. I liked the charred ghosts. But I couldn’t get into the town’s folk. That scene at the bar – where all the patrons go silent and stare at the four outsiders – a little cliché’, don’t you think? In fact, this would have been a much better story if the town wasn’t dragged into the plot, for they were dragged somewhat awkwardly. This is especially true for those who die(?) early on (the electrician, the waitress). I have that question mark after die because I don’t know what happened to them. I think they died but I’m not sure. Things definitely happen to them but then they are just sort of forgotten about.

Ted, you have a nice, horrific house with chilling ghosts and four strong central characters – that’s all that was needed. Keep the ghostly revenge story but forget the town’s folk and their fear that if the house isn’t fed the ghosts will wander about into their lives. It only distracts from the finer points of this film.

I really want to like this film.  I appreciate Mr. Geoghegan’s love for the genre.  But I think he can do better.  Make he his next film will be one that I can love.  Is he going to direct another?  I don’t know, but if so, I’ll give it a shot.  I’m not going anywhere.  I am still here.