Sometime ago, I wrote a review of Robert Marasco’s Burnt Offerings. In the review I refer to book’s foreword, written by author Stephen Graham Jones. Jones’ delineates between two types of haunted houses. There are houses that want you to stay away (i.e. The Amityville Horror house, remember the famous “Get out!” line?) and there are houses that want to imprison you within their walls (i.e. the Burnt Offerings house – it feeds on the essence of its occupants.)  The house that is the subject of this review is definitely of the latter kind.  Its occupants become violently ill when they attempt to leave! There seems to be a powerful spirit at work here.  Its behavior is rather…’creepy’? Nah, that word better describes some hall-traipsing spirit inside a Gothic mansion. This novel is not the Gothic type; after all it takes place on a modern urban street. The spirit – if that’s what it is – has some rather uncanny needs and…I KNOW! Rather than call it “creepy,” its behavior can be summed up as “eerie.”  I am right, you know why? Because that is the title of the book that I am reviewing.  Eerie  by Blake and Jordon Crouch.

The coauthors are brothers with Blake being the more famous of the two. As far as I know, this is the only book that Blake has written with his brother but I could be wrong. I have read enough of Blake’s work to be familiar with his style, which I admire very much, and I’m glad that I can feature one of his books on this page. See, I would not assign Blake to the paranormal genre. Heck I wouldn’t even call him a horror writer. He’s more of the fantasy/thriller type that dabbles in several genres, including sci/fi and horror. Oh and mystery! So much mystery! But “Eerie” meets my criteria for a haunted house novel, although I’m not sure the brothers would consider the novel as such.  I certainly don’t believe that they set out to write a haunted house novel. Instead, I would guess that they created an “eerie” set of conditions that necessitated a house with unexplainable phenomenon.

The book opens with a tragedy. A father and his two children, a boy and a girl (Grant and Paige), are victims of a near fatal car accident. The father is incapacitated, leaving his children to face the cruelty of homelessness and then later the burdens that come with being wards of the state.  Fast-forward several years. The adult brother and sister are estranged.  Grant is a detective involved in missing persons’ cases. Several prominent men have disappeared. He follows the clues and they lead him to his Paige’s house. Before this, he didn’t know where his sister was living.  Their reunion is at first hostile as they rehash old tensions.  But they learn to make nice and they rediscover their brotherly and sisterly bonds. They will need these bonds and much more to fight against the strange forces that hold them hostage at Paige’s house.

Grant and Paige are refreshingly flawed characters. There are no heroes or distressed damsels. Both are likeable in their flaws. In sum they are great characters. Paige is a drug-addicted prostitute.  Grant is an alcoholic who has frequented prostitutes from time to time.  This “frequenting” causes him dissonance when he objects to his sister’s profession. As it turns out, all the men from Grant’s case file, the men that had gone missing, are clients of Paige. They had gone missing as soon as they left Paige’s upstairs bedroom.  Something in that room took over their minds. As if under a spell, they left the premises, not to return to their homes or jobs.  They went – somewhere.  This same presence traps Paige in her own home. It demands that she continue to bring men to her room. Grant too discovers that he is unable to leave.  Both succumb to severe nausea and vertigo when they stray a few feet from the front door. The further they stray from the door the worse the feel.

I like Eerie a lot. But I have some reservations about the book. In order for me to explain what they are I first need to go into more detail about what I like about Blake Crouch’s stories in general.

Blake Crouch creates scenarios that are similar to Twilight Zone  plots. These scenarios unfurl in rather unique and well thought-out ways.  I would say that this unfurling 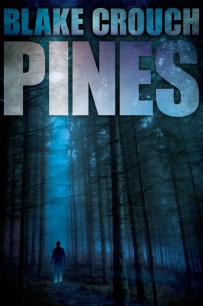 process shows off Crouch’s greatest strength. Thus I knight him: “The Earl of The Unfurl.”  What unfolds in his novels is unpredictable and highly imaginative. The answers to the mysteries are elaborate and yet plausible within the context of the overall story. This is certainly true for his Wayward Pines saga, which was my introduction to the world of Blake Crouch. This three-book series begins with a federal agent that has a car accident and wakes up in a hospital in a strange town. He recovers fine but the townsfolk won’t let him leave this “gated” community; gated by a tall electric security fence. He fights his way to the other side of the fence, only to encounter a never-ending mountainous wilderness populated with strange creatures.  What the heck is going on? The luckiest guess might slacken the suspense a tiny bit but it will not 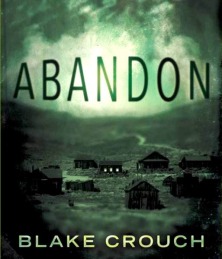 unravel the entire mystery. (this is also a television series on Fox ) Likewise with his novel Abandon. In the novel, explorers set out to investigate the remains of an isolated gold-mining town that “disappeared” in the late 1800s. In this mountainous and blizzard-prone region, the people had seemingly vanished in thin air. Their possessions were left behind, uneaten meals were found on their tables, but no bodies or even bones were ever found.  How could this be? Is this the work of aliens? Spirits? Two stories unfold in this novel– one that takes place in present time with modern day explorers trying to figure out had happened and one that takes place in the far away past, just before the events that led to the disappearance.  By the books end, I was like “Aha! This is what happened! How clever!”  The Earl of The Unfurl had struck again!

I’ve established quite the criteria for ol’ Blake. Now here are the big questions – Does  “Eerie” hold up?  Does the collaborative effort of the two Crouch brothers earn them the title “The Earls of The Unfurl.”  The answers – Almost, but not quite.   The Crouches have certainly created an imaginative scenario – a force of some kind that prevents some people from leaving a house while sending others away as mindless zombies; that is quite the situation. But the “Unfurl” is a bit disappointing. To be fair, the guts of the mystery are rather unique. Maybe they’re too unique, I don’t know. I was looking for a different kind of explanation.  In order to understand what I mean you’ll have to read the book.

In the end what I’m saying is this: I didn’t like the final destination but I sure as hell enjoyed the trip. It was fun and exciting and I enjoyed the characters very much.  Also I enjoyed the afterword (I’m not sure they call it that, but it’s after the main story). Blake and Jordon have a written dialogue with each other. It’s as if they are interviewing each other, going over what they liked about the collaboration process, what changes they had made to the story.  They share with readers their bond as brothers and I appreciate this offering very much. Readers are left with a sense of warmth, which comes in handy on cold days.