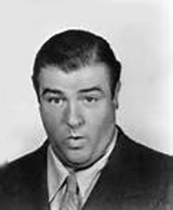 Blogman Dan: Sure! What’s up?

Inner Critic: You really shouldn’t have Lou Costello shouting “Abbott.” It’s not appropriate for this film.

Blogman Dan: Aw gee, Mr. Inner Critic, but when I reviewed that other Abbott and Costello haunted house movie, Hold that Ghost, I began the post with Costello’s signature “AAAA-BBAHHHHET” and the post was a success.

Inner Critic: You were wrong about that too. In Hold that Ghost, the actors do not go by the names Abbott and Costello.  Abbott’s character is Chuck Murray and Costello plays the role of Ferdie Jones. So it would not have made any sense for Ferdie to be calling out a name that was not even in the movie.

Blogman Dan: Okay, so I made one boo boo!

Inner Critic: I’m afraid this time around, you made more than one. In The Time of Their Lives , Bud Abbott plays both Cuthbert Greenway and Dr. Ralph Greenway. Lou Costello plays Horatio Prim. Once again, Abbot and Costello go by different names. In fact in most of their films they go by the names the writers of  each respective film have given them.

Secondly, the two men are not partners in this film.

Inner Critic: No! They’re not even friends. So it would not make any sense to have Costello call out to him! The next time you begin a blog post, I suggest you….

Every once in a while, you have to punch that inner critic right in the nose! An annoying buttinski he can be!

Hi everyone, welcome to my review of The Time of Their Lives. This is a hilarious film that is also surprisingly creepy at the same time. And yes it’s true: Abbott and Costello are not partners.  It was far from their first film and far from their last. I guess somewhere in the middle the comedy duo just wanted to experiment with a different formula. And it worked! I loved their brilliant performances as stand-alones.  Sometimes they are in cahoots and sometimes they work together. But this “togetherness” is made difficult by the fact that Costello is a ghost and Abbott is not. Abbott cannot see Costello. And there was no cellular coverage for interdimensional communication (it was the 1940’s what to you expect?), so it is rather difficult for them to talk to one another.

The movie begins during the Revolutionary War. Horatio Prim (Lou Costello) is a travelling tinker who has come to the estate of Tom Danbury to meet with his love Nora O’Leary, one of Danbury’s servants. He wishes to marry her. To win over Danbury’s approval for such a marriage, Horatio has a letter of recommendation from General George Washington. Ah but he runs into all sorts of hurdles. First, there’s Cuthbert Greenway (Bud Abbott), Danbury’s butler. He wants to be the one to marry Nora. So he ends up locking poor Horatio in a crate. Furthermore, Tom Danbury turns out to be a traitor in alliance with Benedict Arnold. He kidnaps Nora and hides Horatio’s letter in secret compartment within a clock. Later on, the Patriots arrive on horseback. They burn the house down. Horatio and Melody Allen, Danbury’s fiancé, are shot and killed. (Oh yeah, Horatio had escaped from the crate by then) THEY are accused of being traitors (they were not!).  Their bodies are discarded in a well and a curse is placed on them – as traitors, their souls are bound to the

well and its surrounding land.

For a black and while comedy flick in 1946, it was surprising to see the bodies at the bottom of the well. Not quite a barrel of laughs, or in this case, a “well” of laughs. The scene was a bit disturbing.

Time passes. One hundred seventy odd years go by. A new house is on the property. It is built to resemble the original colonial house and includes much of the original furnishings. Somehow these pieces of furniture escape the fire. I forgot how.

Anyway, four people are spending a weekend in the home. One of the occupants is Dr. Ralph Greenway (Bud Abbott), a descendant of the mean old butler that locked poor Horatio in the case. Meanwhile, the ghosts of Horatio and Melody decide to haunt the house. Actually, they are searching the place for the long lost letter written by George Washington on behalf of Horatio. Perhaps it’s hidden inside one of the original furnishings (the clock!). This letter will prove the innocence of the ghosts, and they may then be free to leave the premises and rest in peace.

Now the house haunting begins! There are some “not so bad” special effects going on – pretty good for them there olden days! It was fun to see Horatio and his lady friend their semi-transparent states. It was even more fun to watch a car drive right through them. And I’ll never forget the “walking dress” that descended the staircase! Melody was wearing it but since she herself was invisible, the poor woman that saw this frightful scene was scared out of her wits!

The film does have a problem with continuity when dealing with the physical laws that govern how the ghosts can and cannot interact with physical objects. As mentioned before, a car passes through them. And yet, the ghosts are able to handle objects such as lighters, dresses, etc. They can sit their ghostly rumps down on tree branches. During their very first scene as ghosts, Horatio and Melody try to hug each other. They fail, for they pass right through each other! But later, Melody rests her arms on Horatio’s shoulders. Ah but this is a comedy, so I’ll let it go. Even the famous Patrick Swayze/Demi Moore movie “Ghost” had its inconsistencies. Patrick couldn’t reach out and open doors, couldn’t kiss Demi without possessing the body of Whoopie Goldberg (ewww!). But for some reason, he could sit in chairs and walk on the soles of his feet. I guess the physical laws that govern ghosts are just sooo complicated.

But you want to know what I like best about this film? I like that Costello gets revenge on Abbott. I’m not only referring to how he pranks the Dr. Ralph Greenway Abbot to get back at his ancestor Cuthbert Greenway Abbot. I’m taking in consideration the totality of Abbott and Costello’s antics across all their spooky films. In all these comedic horror movies, it’s usually Costello that is the butt of the supernatural and/or scary jokes. It’s Costello that freaks out over the moving candle in Hold that Ghost. It’s Costello that first encounters Dracula and Frankenstein in Abbott and Costello meet Frankenstein. By the time Abbott gets around to seeing what in the heck is spooking his friend, the ghostly/monstrous shenanigans have stopped, leaving Abbot to chide his companion with an “Aww you’re imagining things!” 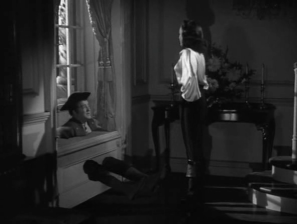 The tables have turned. Costello, as a ghost, pulls tricks on Abbott and nearly drives him out of his mind. He disturbs his sleep by playing the harpsichord. He lights his cigarette, but Abbott doesn’t see Costello- he only sees a lighter hovering in the air. He gives him a good kick in the ass over a chair! You go Costello!

Mind you, Costello gets into his own fixes as well. It just wouldn’t be an Abbott and Costello movie without hearing Lou trying to catch his breath while he is freaked out by something.

Abbott and Costello meet Frankenstein is probably my favorite comedy horror film from this duo. The Time of Their Lives might be my second.  Regardless, I catch all their frightfully funny films whenever they are shown on Svengoolie on Saturday nights on MeTV.  I love my Svengoolie. And you should too!