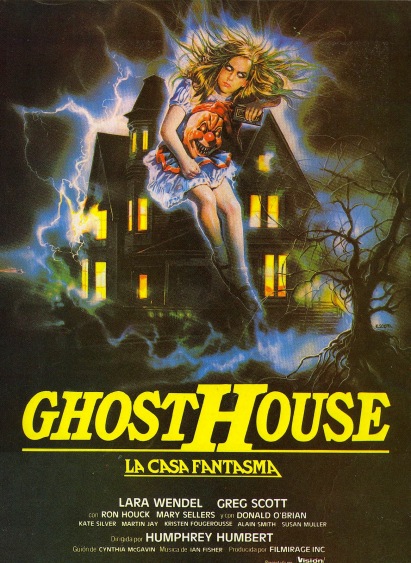 If only filmmakers possessed the gift of hindsight at the very beginning of a film project! (Question – Wouldn’t that be “foresight” then? Answer – Oh yeah!)  Had Umberto Lenzi, director of the film Ghosthouse – the subject of this review, been able to see the final product before the filming (before the writing as well), he would have known what works and what doesn’t. There are some well-crafted scenes in this film; they are genuinely frightful. But alas, most of the scenes in this movie are cringe worthy. In sum, the “stuff of ghosts” is good; the “stuff of people” is bad.  If only this “imbalance of stuff” could have been realized at the very beginning. They could have scrapped all the “people talk to people” plot elements and relied heavily on the basics of “people encounter ghosts.” But isn’t this always the case – ghosts rule and people suck?  You are saying “no.”  Okay I hear ya! Great characters and excellent dialogue go a long way. But some films just aren’t destined for Oscar worthy dialogue and acting. When this is the case (and here is where the foresight comes in handy!) it’s better to hone in on other aspects of the film.  This “ghosts over people” strategy would have at least made for an average haunted house film. “Average” isn’t great but it is better than “below average.”   Alas, Ghosthouse is below average.

The story beings with a house and the horrific murders that took place on the premises. See, there’s this little girl and her clown doll (already we know this pairing can only lead to trouble!). Like all normal little girls, she has a mommy and a daddy. But parents of little girls who play with clown dolls are not destined to have long lives. The parents die, and we’re not quite sure what happened to the girl and the doll. Not until later. Fastforward twenty years or so, the house is abandoned.  But don’t worry, it will be acquire some occupants; a few squatters and a bunch of trespassers. Take for instance this guy Paul. He is a CB fanatic and he picks up some disturbing voices over his radio. He and his girlfriend trace the signal to the abandoned house, where some squatter has set up his own CB station. He squats in the house with his girlfriend and younger sister.  Now we have five youth, all potential victims for some deadly ghostly shenanigans! You know the drill.

The sounds and screams that come over the CB – chilling. The carnivalesque music and the mechanical clown laughter that occurs whenever something frightening us about to happen – creepy! The crazy old man with his pitchfork weapon – disturbing! The ghostly scenes with the little girl and her creepy clown doll – awesome!  Oh but the acting is so

bad, and the dialogue is terrible, and the motivators that move the characters to do what they do are pathetic and all this makes a mess out of the overall story.  Why oh why can’t these kids stay around the house, where all things are scary, and just accept their fate and die?  No they have to leave the house, get in involved in lame-ass plots in places far away from the frights of the film, only to return, then separate, them come together, then separate again, over and over when all we want is for these annoying characters to perish in a most haunted way!

Sometimes it’s better to “Go for the Ghosts” and forget all this “Power to the People” jazz. Such a time should have been 1988 – the year this film debuted in Italy. Oh well, what’s done is done. It’s all in hindsight now.